Feel More in Control of Your Life!

Welcome to our specialized and highly individualized program on stem cell treatment for Parkinson’s disease in Mexico! We have partnered with the global leader for stem cells research, GIOSTAR, for providing stem cell Parkinson’s treatment and helping you regain control over your life. 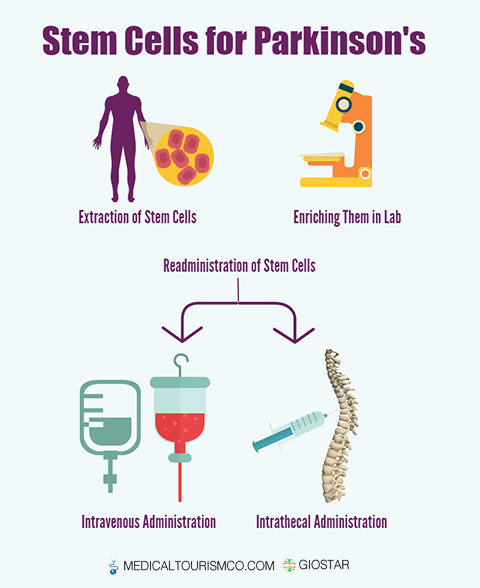 ✔ ​  ​Advisory council made up big names from renowned institutions, such as the London Imperial College, UCI, UCSD, and Harvard

After stem cell therapy our clients suffering from Parkinson’s have reported the following improvements:

We Analyze Each Case Individually
On receiving patient-info we analyze each case individually and work on a personalized protocol compromising several applications for solving a problem completely.

Our Program Comprises Multiple Applications
Other stem cell centers in Mexico believe in doing one application individually and then waiting for results, and then following it up with another application, say six or seven months later. We, on the contrary, offer an entire therapy comprising three to four applications.

We Conduct Our Own Research

We do not use other people’s research. Stem cell is an ever evolving science. We conduct our own research and have our own team in India as well as some doctors in Mexico who work on putting up a specific case for our patients.

Dr. Anand Srivastava, the founder of GIOSTAR, has helped set up research projects at several prestigious institutions, such as:

An ultimate authority in the field, Dr. Anand has played a crucial role in researching and formulating stem cell therapy for various autoimmune, degenerative, and blood related disorders.

We Use Only Human Stem Cells

Another thing that differentiates us from other stem cell centers in Mexico is that we use only human Induced pluripotent stem cells (alternatively known as iPS cells or iPSCs).

When we separate the cells, these are adult cells with their limitations. Using special technology in our labs, we reverse the age of the cells, and reprogram them enabling them to behave like embryonic cells which are pluripotent (master cells). These cells are further differentiated and are assigned with specific functions.

On an average therapeutic surgery costs in the United States are around $100,000. Our treatment costs are more than 80% lower than the US prices.

We offer stem cell treatment at properly licensed and certified hospitals in Tijuana and Guadalajara. Our new facility in Los Algodones, Mexico is a state-of-the-art center with a proper OR for stem cell therapy.

GIOSTAR, a San Diego, California headquartered research company, aims to make this most advanced and elite science of stem cells available to the masses. Its board comprises the most brilliant minds in genetic and cancer research. It is living by its motto of finding cures for diseases medical science has no answers for.

And the answer lies in stem cells, which are the master cells of our body from which the entire human body is created. Their primary function is to regenerate into cells and organs that have degenerated due to disease or injury. Stem cell therapy aims at reactivating the latent power of stem cells which otherwise lie inactive in our body.

The organization is involved in building the largest stem cell treatment hospital in India and after helping nearly 4,000 people with various conditions in the country, it now brings stem cell treatment in Mexico at much affordable prices than in the United States.

It has developed the technology to concentrate stem cells from own body (autologous) as well as allogeneic sources to reintroduce these cells into the damaged organs or tissue to initiate their repair process. In case of brain damage, we have the technology to generate brain cells out of other stem cells in the lab.

What is Parkinson’s Disease (PD)?

It is a progressive nervous disorder that adversely affects movement. The symptoms associated with it become worse with the progression of the condition over a period of time.

Some of the principal motor signs of Parkinson’s are: 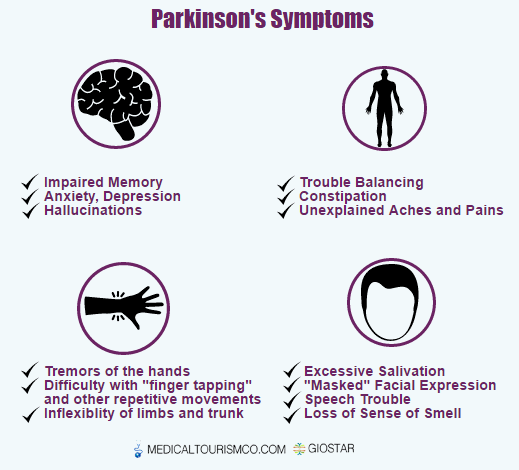 Some of the non-motor symptoms which are known to precede the motor signs are:

Parkinson’s reduces the levels of brain dopamine. Dopamine is a neurotransmitter, and helps pass messages between neurons (present in the region of the brain called substantia nigra) and other parts of the brain which helps control movements. As a result of Parkinson’s nearly 60-80% of the cells producing dopamine get affected and do not produce adequate quantities of dopamine. This results in the motor and non-motor problems associated with PD.

Research studies suggest deposition of lewy bodies (LBs), majorly composed of the brain protein alpha-synuclein, in the transverse section of the brain, which is known to mark neurodegenration.2 Deposition of LBs around the neuron leads to degeneration of dopamine, which in turn leads to the motor neurons getting degenerated.

Stem cells are replenishable sources of tissue which can be developed or differentiated into various kinds of cells in the body.

Induced pluripotent stem cells (iPS or iPSCs) are a type of stem cells that are quite similar to the ethically questionable embryonic cells that have the ability to transform to other cells. iPSCs are re-programmed and are an adult version of an embryonic cell. 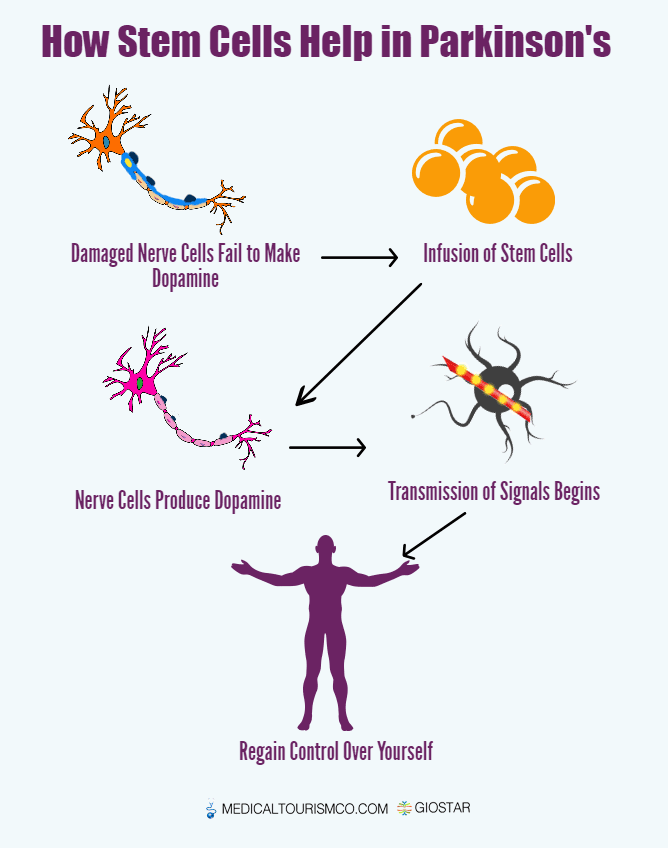 Stem cell treatment of Parkinson’s at our centers in Tijuana, Guadalajara, and Los Algodones involves:

✔  ​Enriching these cells in the lab

✔​  Re-administering them back into the body by either:

✔  ​After re-entering the body, the stem cells populate in the damaged regions

✔​  Through a process called paracrine-signalling – which is a form of communication between cells – they develop into the damaged and lost dopamine-rich neurons, also known as dopaminergic neurons. They also develop into other ancillary cells which improve motor capabilities of the brain.

Our stem cell treatment program for Parkinson’s in Mexico brings a new lease of life for people living with it.