Let Multiple Sclerosis Not Control You!

Welcome to our comprehensive program for Stem Cell Multiple Sclerosis Treatment in Mexico. Medical Tourism Corporation (MTC) has collaborated with San Diego-headquartered GIOSTAR, a global leader in stem cell research and therapy, for treating this chronic disease which attacks the central nervous system.

I Have More Energy Now!

“My reports were reviewed in San Diego, USA. They also had my stem cell protocol decided there. Within 24 hours of my first stem cell transplantation I was able to stand without any pain. I was very happy to be without pain after so many years. I feel more energetic and vibrant.” 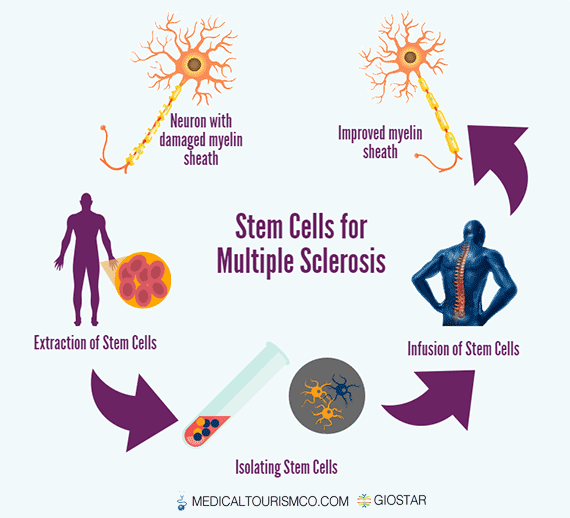 Our treatment protocols are unique to every individual, and comprise multiple applications. Other clinics in Mexico usually offer stem cells on a single application basis. But we study each case individually, and formulate a personalized protocol made up of 3-4 stem cell applications as a complete solution to the problem.

We Do Our Own Research

We do not rely on any outside research as we have our own research team in Mexico and India. GIOSTAR has been pioneering stem cell research work for more than 15 years. The company’s founder – Dr. Srivastava – played a pivotal role in setting up stem cell research programs at several world-class institutions, such as:

We Use Differentiated Stem Cells

Unlike other stem cell centers in Mexico which infuse cells without differentiating them, we use only differentiated stem cells. We are adequately equipped to extract mesenchymal stem cells from the adipose tissue, which are further processed and multiplied. We make use of induced pluripotent stem cells (iPSC) by reversing their aging and rendering them blank so that they can differentiate into specific cells that would help treat the problem.

Our stem cell multiples sclerosis prices in Mexico are quite competitive. Contact us to know more.

We take care of each and every aspect of your stay for MS stem cell treatment in Mexico – right from hotel stay to transportation.

We offer stem cell therapy at well-equipped hospitals and centers in Tijuana, Guadalajara, and Los Algodones. These facilities are duly licensed to carry out stem cell procedures.

Del Pedro Medical Center in Tijuana is a Health Secretary of Mexico-certified hospital of excellence. It is barely 10 minutes from the border crossing. San Javier Hospital in Guadalajara is the first in Mexico to be certified as a specialty hospital. Our stem cell spa center in Los Algodones is a state-of-the-art facility with an ultra modern OR.

With more than 4,000 success stories to its name, GIOSTAR has the technology to harness the power of stem cells in fighting several diseases which till now are considered incurable. Some of the most top names in stem cell research are part of its advisory council helping it spearhead its treatment programs.

What is Multiple Sclerosis?

​✔ ​Multiple sclerosis (MS) is a disease of the nervous system caused by inflammation of the central nervous system when the body’s own immune system mistakenly attacks the insulating cover around the nerves cells called myelin.
​✔​ When the insulation shield of the nerves wears off in a process called demyelination they stop functioning properly.
​✔ ​The affected myelin forms scar tissue or sclerosis which gives the condition its name “multiple sclerosis”.
​✔ ​Any harm to the myelin sheath leads to distortion or disruption of nerve signals traveling between the brain and spinal cord, which results in a number of symptoms.
​✔​ The cells responsible for attacking the insulation sheath are the T-cells of the immune system.

Relapsing-Remitting MS (RRMS)
According to the National Multiple Sclerosis Society RRMS is diagnosed in approximately 85% of the people with MS. It is the most common form of MS and is marked with definite attacks of the neurological symptoms. After this there are periods of partial or even full recovery.

Primary Progressive MS (PPMS)
It is marked with deteriorating neurological functioning without any periods of recovery. According to the National Multiple Sclerosis Society, it affects 15% of the people with MS.

Secondary Progressive MS (SPMS)
SPMS comes after an initial relapsing phase of MS. Majority of the people with RRMS will move on to this phase, which is marked with further deterioration of the neurological working. 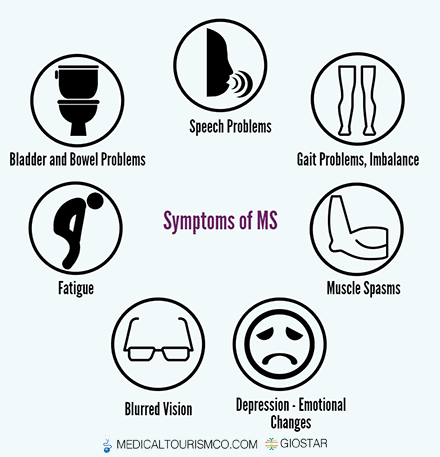 What are Stem Cells?

Stem cells are master cells which are able to replicate themselves into several copies through self-renewal and also produce cells performing specific functions, such as nerve cells, through the process of differentiation.

Conventional medications are not a complete cure for MS. They only help reduce the symptoms associated with it. Stem cells are a new ray of hope for people with MS. According to a study by Chong Xie et al.1 “iPSC-derived stem cells have shown great potential in the treatment of MS.”

Another study by Castro-Manrreza and Montesinos2 published in 2015 shows that mesenchymal stem cells are known to regulate the immunity system, and improve the symptoms associated with MS by reducing the inflammation of the central nervous system and the loss of the myelin sheath (demyelination).

​✔​ GIOSTAR is duly certified and has all the latest equipment for drawing out workable stem cells from the patient’s own body (autologous) as well as from a matched donor (allogeneic sources); it also has the technology for processing and enriching them in the labs.

​✔​ We use adult mesenchymal cells (MSCs) obtained from adipose tissue, and offer personalized protocols because we induce the cells (in the lab) to become a certain type of cell, depending on the condition(s) we want to treat.

​✔ ​These cells are either infused through an intrathecal injection into the fluid around the spinal cord or through IV with mannitol to increase the blood quantities which helps adequate numbers of stem cells reach the desired parts.

​✔ ​After re-entering the body, the stem cells are known to colonize the desired areas through paracrine signalling, and are able to differentiate into new neurons and even help restore destroyed neurons so that they start functioning normally again.

With our highly personalized protocols you can now experience significant improvements with stem cells for multiple sclerosis as well as stop further deterioration in progressive MS.