Turkey is a haven for those who need affordable dental care. The cost of dental work in Turkey is much lower than what you would pay back home, especially if you are from the US, UK, or a nearby European nation.

Cost of Dental Work in Turkey

So, how much does dental work cost in Turkey? The following table compares the dental treatment prices in Turkey with prices in Russia and Ireland.

The above table clearly shows huge savings on treatment in Turkey. Here, you can save up to 30%-80% on prices in Russia and Ireland.

Located in Istanbul, DentGroup has its own digital dental laboratory to provide the best dental services to its patients. Dental restorations are created utilizing the highest quality dental devices. These are created from biocompatible and organic materials. 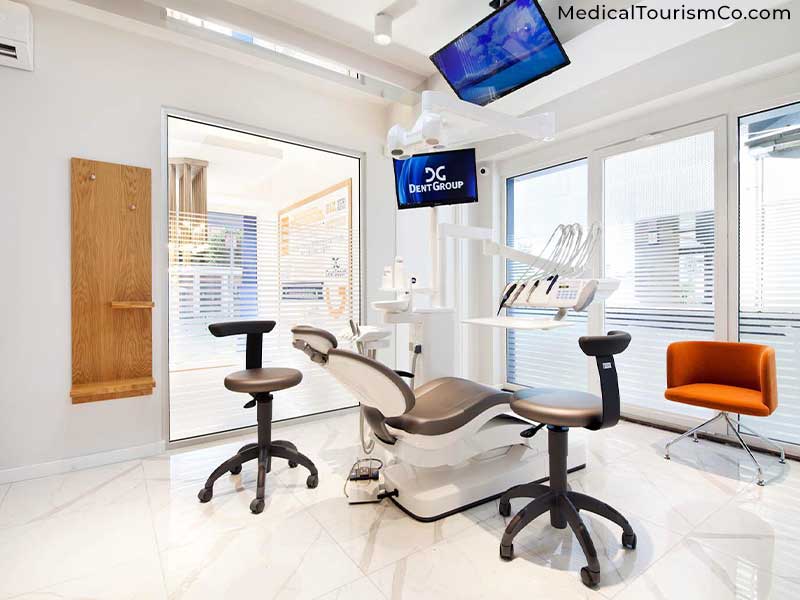 Dr. Tuğrul Saygı is the main dentist at DentGroup 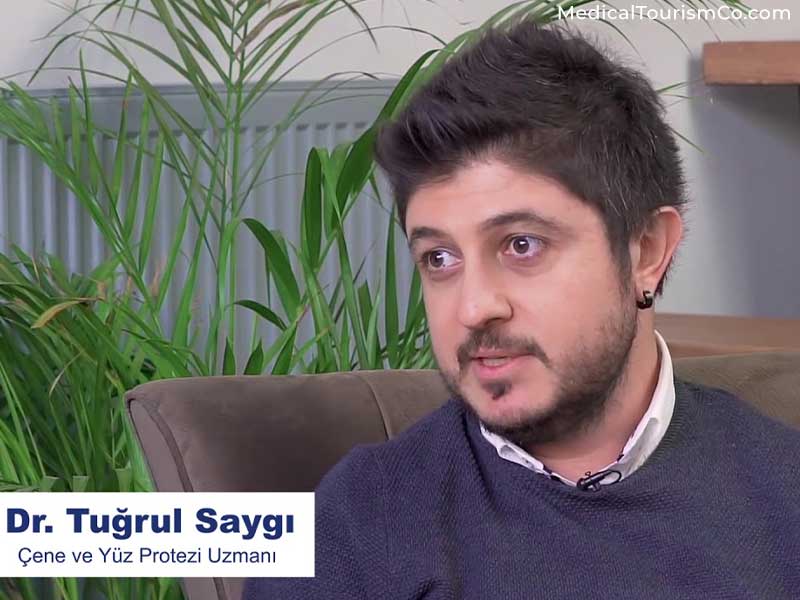 DentaGlobal is a dental clinic in Izmir. It offers high-quality dental treatment at affordable prices. The clinic offers techniques, such as IV sedation, to help people have an anxiety-free and relaxing experience while getting dental treatment. 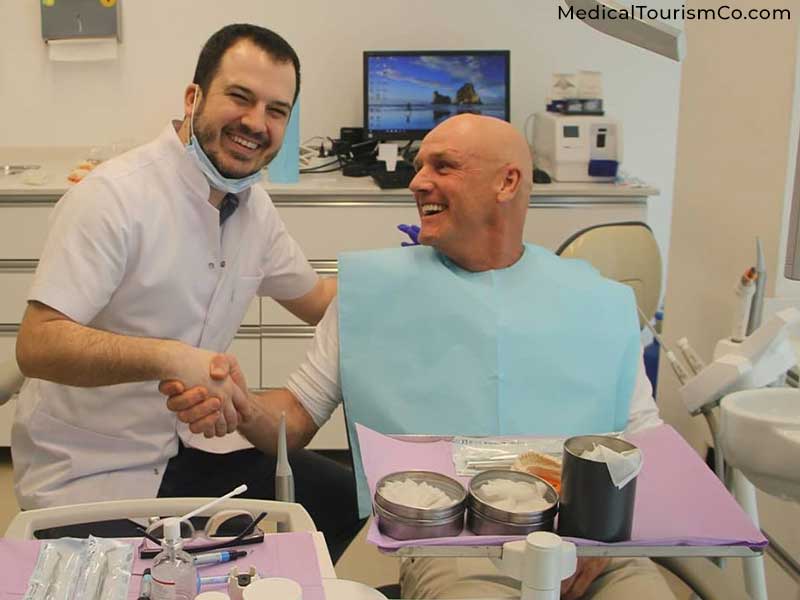 Dental Excellence provides quality dental services in a comfortable environment in Antalya. Dentists at the clinic pay attention to the details of their patients. They are members of the Turkish Dental Association (TDA). You can be sure that registered and qualified dentists will treat you. 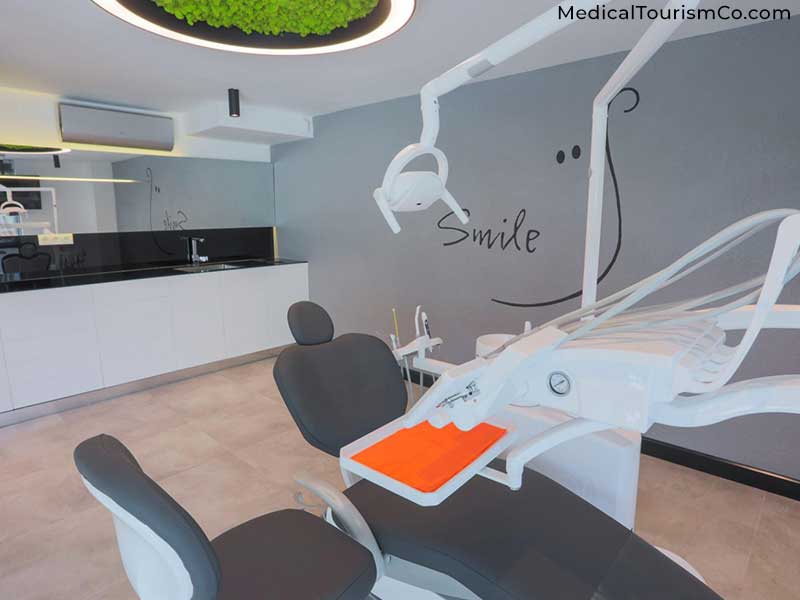 Distance from hotel zone: Located in the hotel zone itself
Guarantee: Dental implants have a lifetime guarantee, and dental crowns have a guarantee of five years.
Hotels recommended: The clinic has many contracted hotels, such as Akra Hotels, Laren Family Hotel & Spa, and Yazar Lara Hotel.
Payment methods: Credit or debit card and cash in Turkish lira, US dollars, Euro and English Sterling.
Languages Spoken: Turkish, English, German, Dutch, Russian, Ukrainian.
Sterilization: They have a separate room for sterilization. All instruments are completely sterilized by autoclave with a special packing method according to the international medical standards.

Dr. Fatih Erkun is the chief dentist at the clinic. 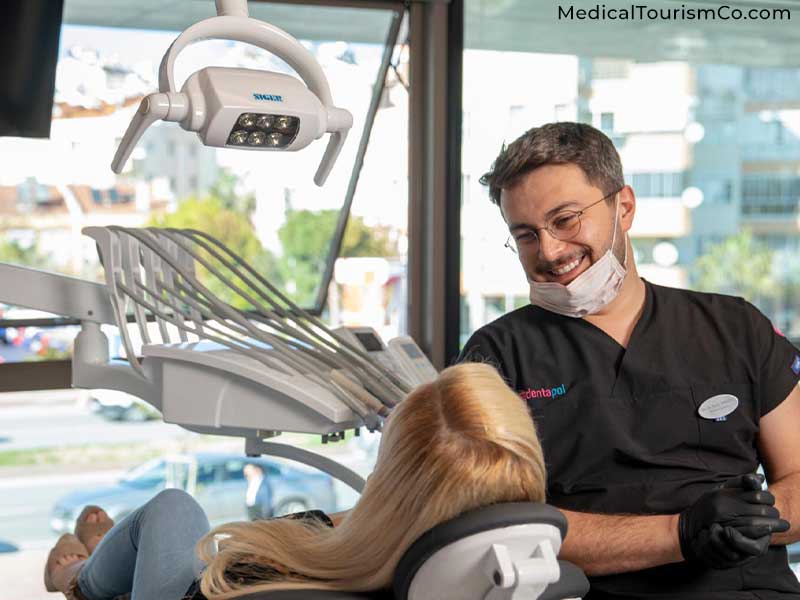 Dental Aesthetic Center is an international dental clinic in Ankara, Turkey. The clinic treats patients from 98 countries, including the UK, USA,

With 24+ years of experience, Dental Estetik Center is renowned for its personalized solutions, customer-centric approach, and offer unique treatments in a relaxed environment. 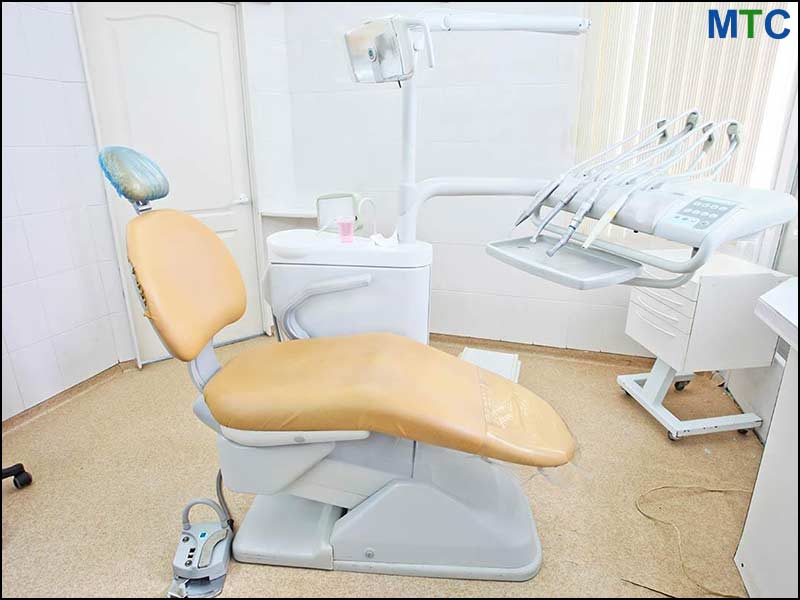 Distance from hotel zone: 10 – 15 mins walking distance from the clinic
Hotels recommended: Tryp by Wyndham & Monec Hotel
Payment methods: Turkish Liras, USD, or Euros, debit or credit cards, international cards.
Languages Spoken: Turkish, English
Sterilization: All instruments are sterilized as per international medical standards. The materials used for the dental treatment and sterilization of instruments are approved by the FDA. 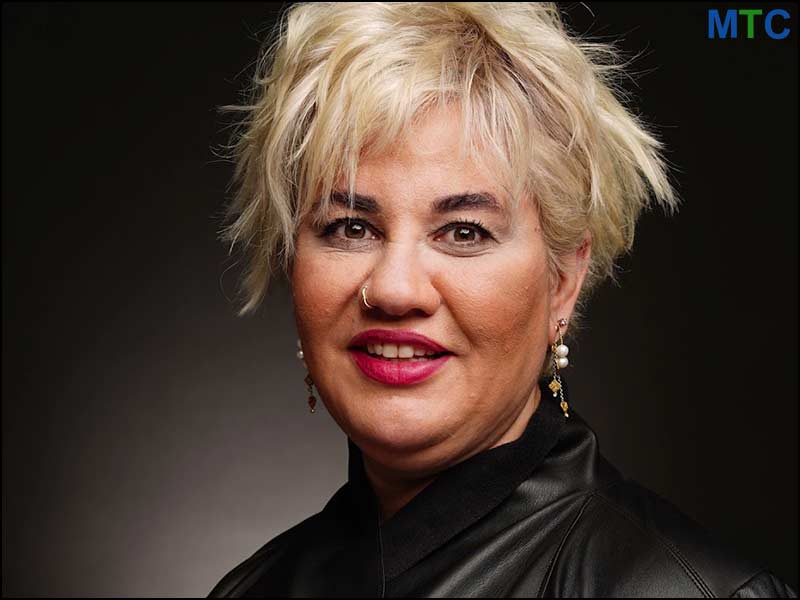 Why Dental Work in Turkey

Getting Around in Turkey

In addition to quality dental work, Turkey is known for its tourist attractions. So, you will be able to combine your dental treatment and tourism activities simultaneously.

You can find the best Turkish foods in Istanbul that taste incredible. Kebabs, mezes, desserts, and meat dishes are some of the things you can eat in the city. In addition to this, the city is full of historic mosques, churches, museums, and palaces.

Hagia Sophia is the former Christian church, later a mosque and now a museum in Istanbul, Turkey. It was constructed in AD 537.[19]Britannica Haghia Sophia “The Hagia Sophia was built in the remarkably short time of about six years, being completed in 537 ce.” View in Article The museum is known for its huge dome. 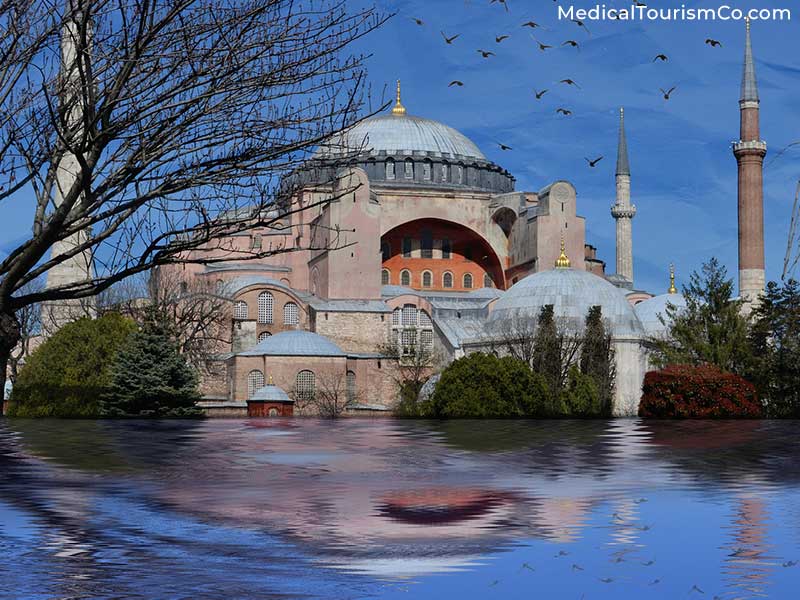 It is a historic mosque that was built between 1609 and 1616. The interior walls of the mosque are adorned by blue tiles.[20]Blue Mosque About Blue Mosque “The mosque is known as the Blue Mosque because of blue tiles surrounding the walls of interior design.Mosque was built between 1609 and 1616 years, during the rule of Ahmed I. just like many other mosques, it also comprises a tomb of the founder, a madrasa and a hospice.” View in Article 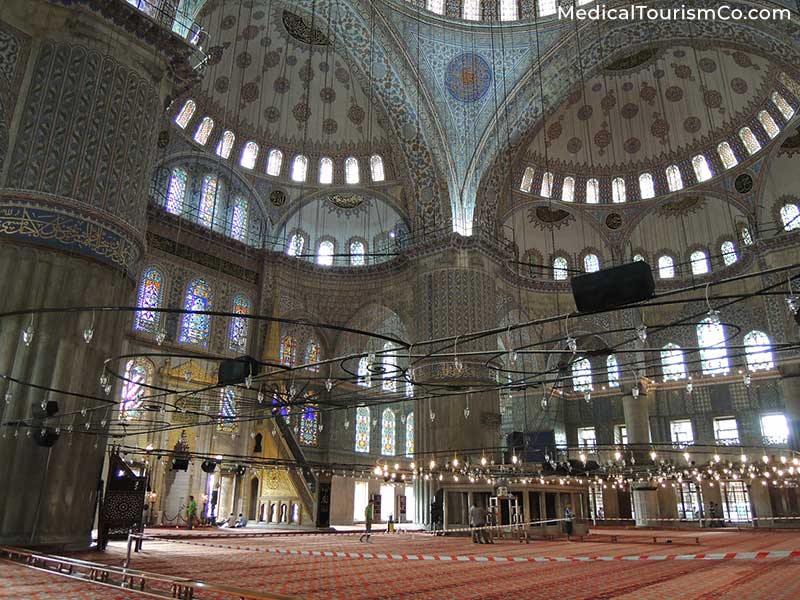 A visit to the Grand Bazaar will offer you a unique shopping experience steeped in the flavors of Turkish culture and life. Its various kiosks sell everything from spices and Turkish delights, to Turkish teas and kilim rugs. 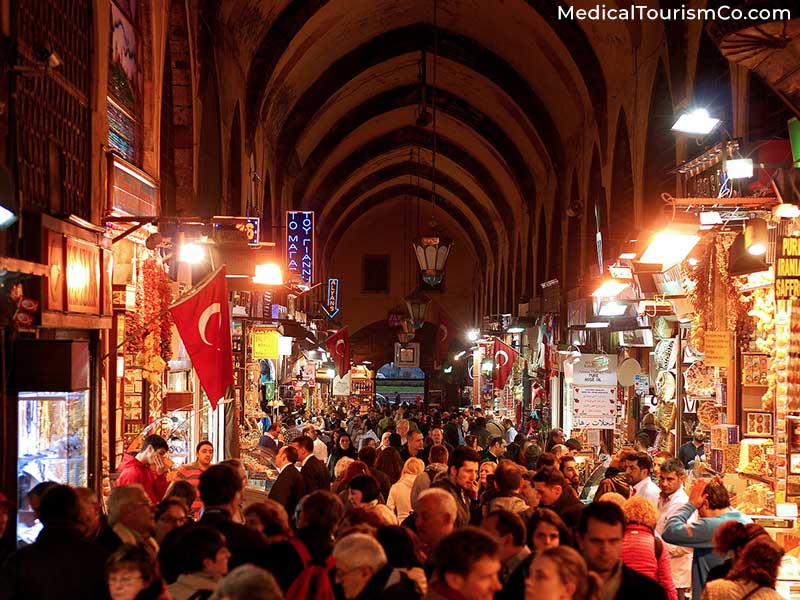 UNESCO has declared it a World Heritage Site. The palace complex consists of several small buildings and courtyards. It served as the administrative headquarters and main residence of the Ottoman sultans in the 15th and 16th centuries.[21]Britannica Topkapi Palace Museum “It is housed in a palace complex that served as the administrative center and residence of the imperial Ottoman court from about 1478 to 1856.” View in Article 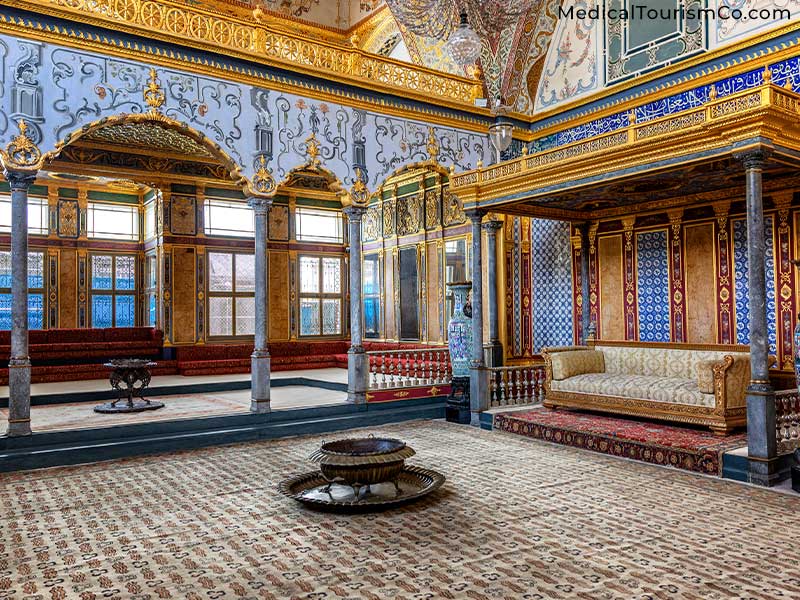 Palm trees line the streets of Izmir, and the houses are stylish. Its coastline is renowned for its nightclubs, discos, bars, and fish restaurants.[22]Go Turkey Izmir “The city’s coastline is renowned for its fish restaurants along the coast as well as its bars, discos and nightclubs whereas its hinterlands are rich in monuments and ruins which tell the tale of countless ancient civilizations.” View in Article The city’s hinterlands are rich in ruins and monuments that tell the stories of numerous ancient civilizations. 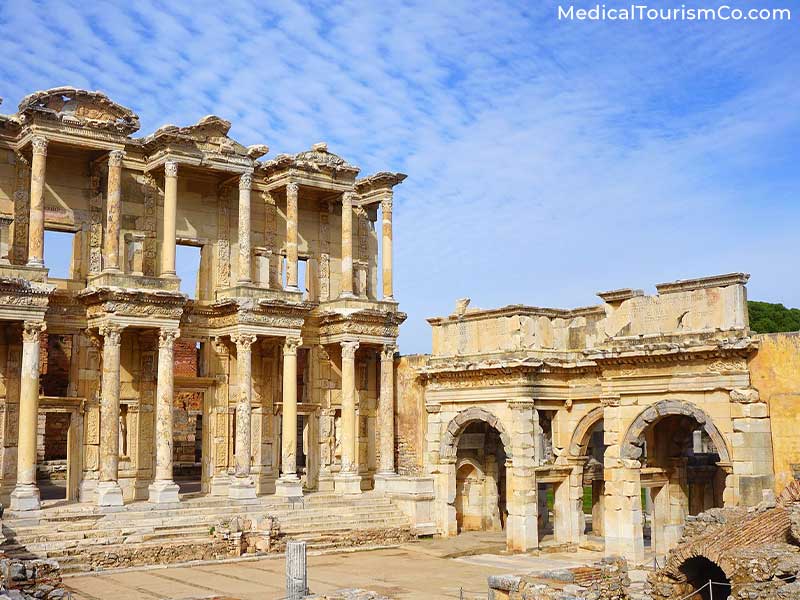 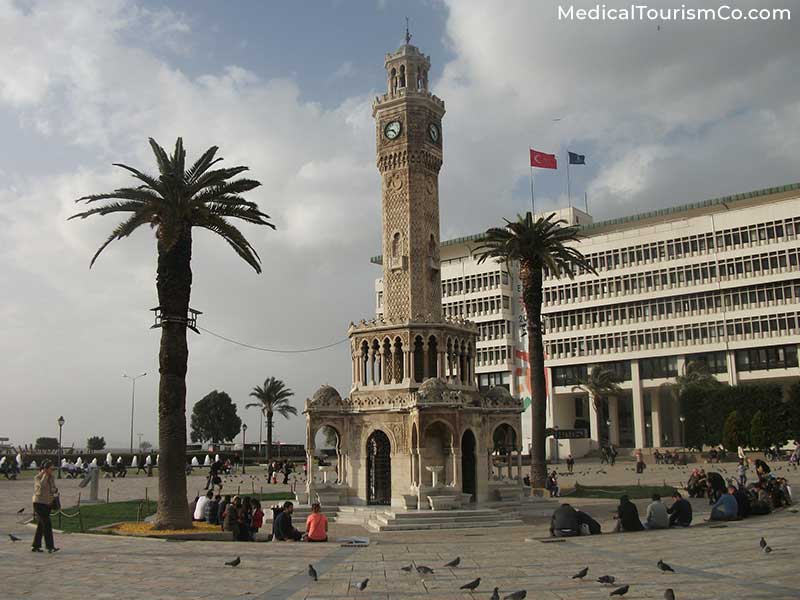 Also known as Pamukkale, Hierapolis is an ancient city known for its sacred hot springs. It is also a World Heritage Site. 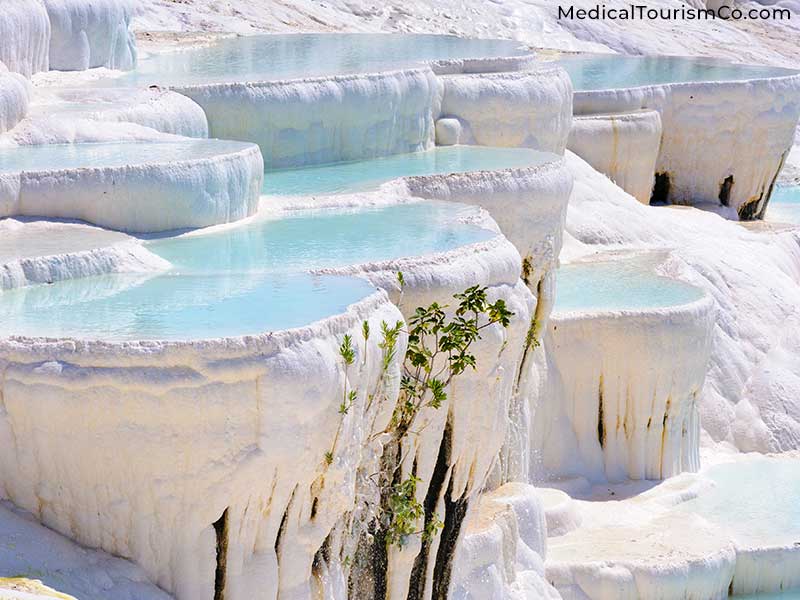 Pergamon is an ancient city in Izmir featuring a library, theaters, and ancient temples. It is also a UNESCO World Heritage Site. 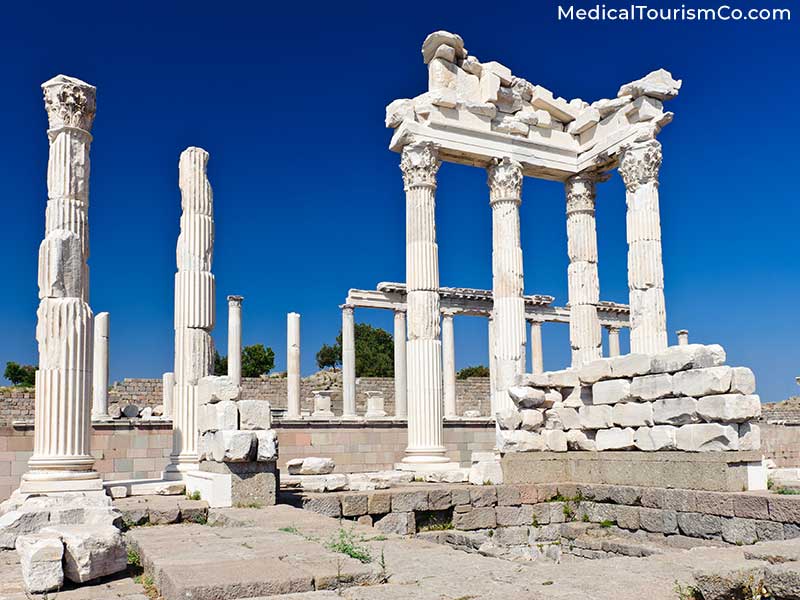 This fascinating Turkish province is located on the Mediterranean coast. It is surrounded by natural wonders such as beaches and mountains and offers a never-ending array of attractions.

Magnificent gardens surround Duden Waterfalls. They are a good picnic spot in Antalya. Behind the waterfalls, a natural cave is popular with swimmers. 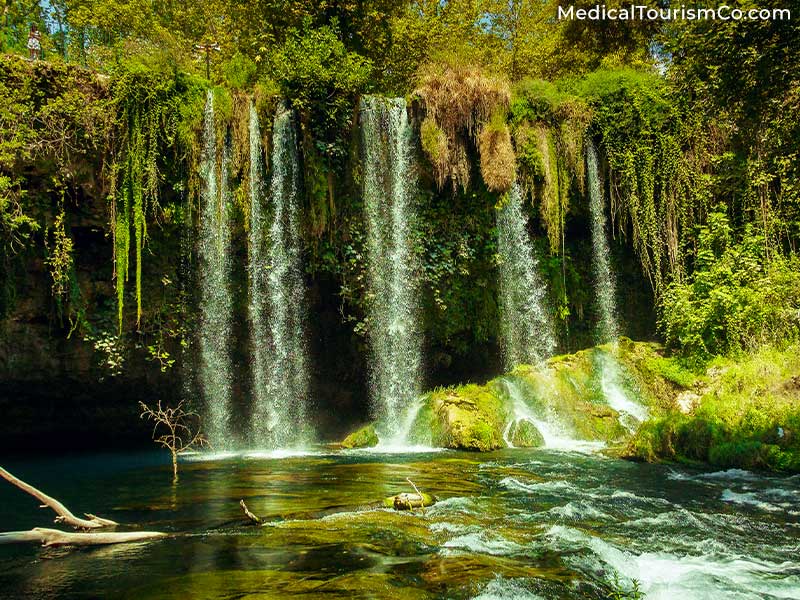 The Antalya Museum features many exhibition halls and an open-air gallery with archaeological items and artworks dating back to various civilizations. 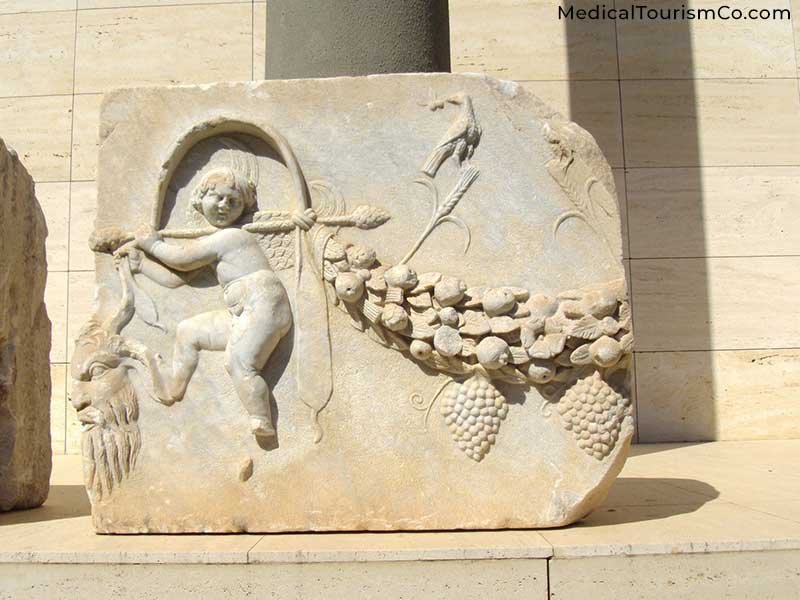 The Konyaalti beach is situated on the western side of Antalya. Close to the beach, there are many hotels, nightclubs, cafes, and bars. 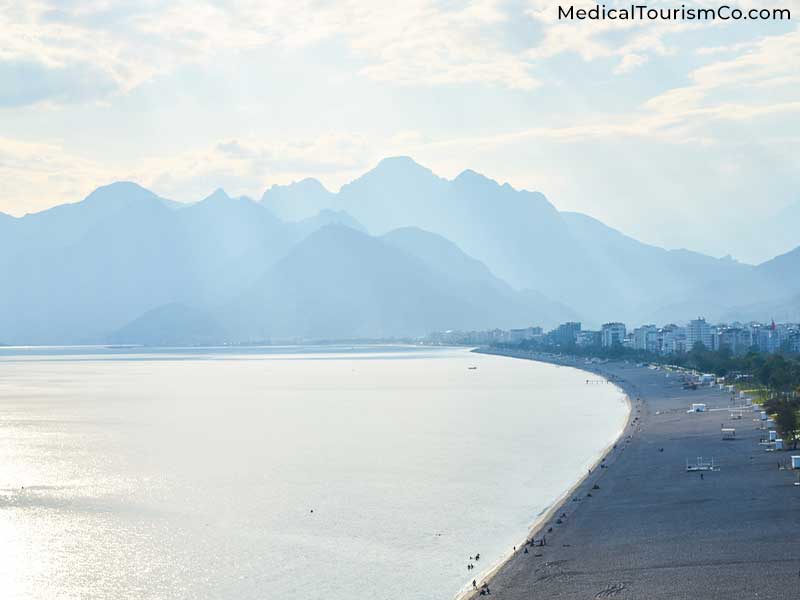 Wish to go away from the hustle-bustle of the tourist spots in Antalya? Check out Analya, quiet and mesmerizing city, located only 2 hours away from Antalya. 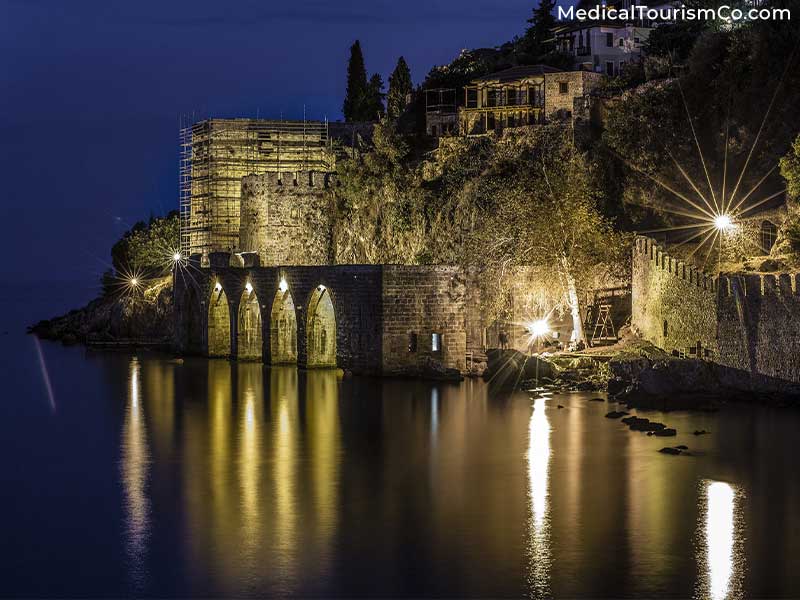 You will experience history, culture, and nature in the country. As seen, Turkey offers breathtaking archaeological sites, historical sites, natural beauty, and a tradition of hospitality.

Do tourists need a visa to visit the country?

For tourism travel of 90 days or less within half a year, tourists need to get a visa from the e-Visa application system or Turkish representations abroad before traveling to Turkey.[25]Travel.State.Gov Turkey “You need a visa to travel to Turkey. For tourism or commercial travel of up to 90 days within a 180 day period, obtain a Turkish visa from Turkish missions abroad or from the e-Visa application system prior to arrival.” View in Article If you want to get more information about the visa, click here.

Should international patients receive a vaccination before visiting the country?

International visitors should be up-to-date on vaccines, such as typhoid, tetanus, and polio vaccines before entering Turkey.[26]Traveler’s Health | CDC Turkey Traveler View “Make sure you are up-to-date on routine vaccines before every trip. These vaccines include measles-mumps-rubella (MMR) vaccine, diphtheria-tetanus-pertussis vaccine, varicella (chickenpox) vaccine, polio vaccine, and your yearly flu shot.” View in Article

Can international tourists use their mobile devices in the country?
Do people in Turkey speak English?

You will easily find English speakers in holiday resorts and major cities. Restaurant menus and other vital information for international tourists are printed in English.

Is it safe to travel to Turkey?

Yes, it is safe to travel to Turkey, except the border areas.[27]U.K. Govt. Foreign travel advice : Turkey “The FCO advise against all travel to: areas within 10 km of the border with Syria, except the city of Kilis (see below)” View in Article [28]U.S. Govt. Foreign travel advice : Turkey “LEVEL 2: Exercise Increased Caution; Do not travel to: Areas near the Syrian and Iraqi borders due to terrorism. (Level 4)” View in Article

Crime rates in the country are low.[29]GOV.UK Foreign Travel Advice Turkey “Generally crime levels are low, but street robbery and pick-pocketing are common in the major tourist areas of Istanbul.” View in Article However, international tourists should not travel within 10 km of the border with Syria, where military activity and the threat of violence are high.

All our dental locations i.e. Izmir, Istanbul, and Ankara are away from the areas bordering Syria.

All three Clinics are much appreciated by patients worldwide. On the basis of Google reviews, follow the ⭐⭐⭐⭐⭐ ratings:

We suggest, you hear it from the patients themselves:

Visit Turkey for its historical significance, natural beauty, and cheap dental work. For more information on dental work in Turkey, contact us now!