Many diseases like sickle cell anemia have not been known to have a definitive cure. Stem cell therapy has not been used as a very common treatment option around the world. Even in places where it is done, it is usually unaffordable.

Stem Cell therapy for Sickle Cell Anemia in Mexico presents the average individual with a chance to avail this treatment. In Mexico, this treatment is being provided at very low costs as compared to the USA or Canada.

According to the Center of Disease Control (CDC) in the USA, the statistics relating to Sickle Cell Anemia:

Even from the Public Health point of view, SCD is a major concern. Approximately 75,000 hospitalizations were documented in the USA from 1989 to 1993, due to SCD, costing approximately $475 million.

What is Sickle Cell Anemia?

Sickle Cell Anemia is a Genetic disorder. The basic defect lies in the structure of Hemoglobin. Hemoglobin is the oxygen-carrying component of the blood. Due to this defect, the Red Blood Cells (RBCs) which are normally disc-shaped, become sickle-shaped. This is sometimes known as Sickling of RBCs.

This sickling also makes them rigid. The final result is decreased oxygen-carrying capacity of the blood, leading to a decline in the health of various organs and tissues. 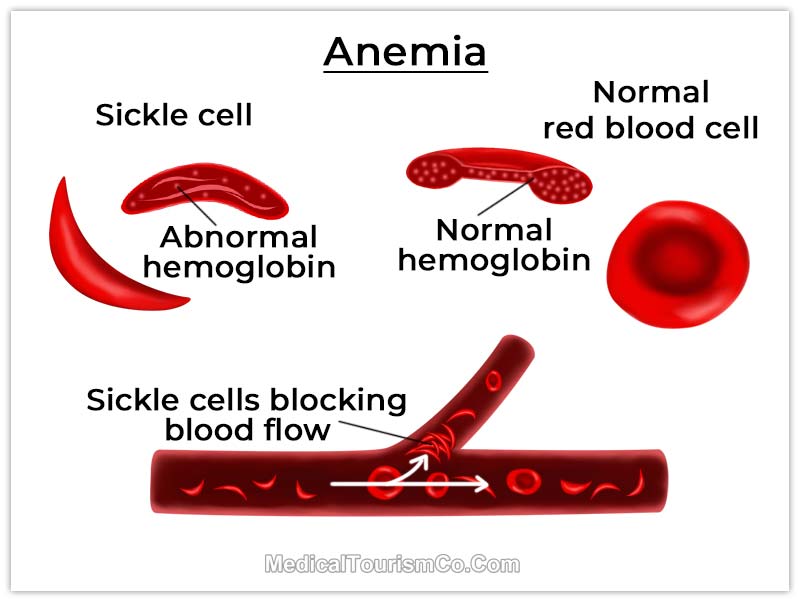 Sickle Cell Anemia can be of two main kinds:

What are the symptoms?

Stem cell treatment works on the principle of Regeneration. The mother cells (stem cells) extracted from the donor are activated and infused into the recipient’s body.

Stem cells divide into daughter cells. These daughter cells are guided into becoming specific cells which promote repair response of injured or diseased tissue. These are known as Induced Pluripotent Stem Cells (IPSCs).

Thus, stem cells can be used to treat a large number of degenerative diseases. Here are some of these diseases:

A research study was done between 2004 and 2013, to see how successful stem cell therapy is. Thirty patients, ages 16 to 65, with severe sickle cell disease enrolled in the study. The findings of the study were as follows:

Stem cells can be extracted either from the bone marrow or from the peripheral blood.

Peripheral blood is the blood which is being circulated in the body.

If the stem cells are taken from the bone marrow, the process will be called Bone Marrow Transplantation. The cells extracted in this case are Hematopoietic Stem Cells. They will divide to form the three kinds of blood cells, i.e., Red and White blood cells, and Platelets.

The stem cells taken from Peripheral Blood will form other body tissues like the heart tissue or the lung tissue. This has applications in congenital heart disorders or other degenerative diseases.

The only difference, therefore, in the two procedures is the location from which stem cells are extracted.

What are the chances that my child will get Sickle Cell Anemia?

Sickle cell anemia is a genetic disorder which is inherited in an autosomal recessive pattern. To interpret what this means, you must first understand the structure of a gene.

Genes are made up of DNA. Each person has two copies of a gene, one from each parent. These genes will determine the unique qualities of an individual.

Sickle Cell Anemia is a result of a mutation in the gene which is concerned with Hemoglobin. Hemoglobin is the oxygen-carrying component of blood. HbA, which is normal adult hemoglobin, changes to HbS, a mutated form of hemoglobin.

On the cellular level, the Red Blood Cells which carry Hemoglobin and are normally disc-like, become sickle-shaped and inflexible. Practically, this means that the sickled RBCs block the flow of blood in the body, leading to a shortage of oxygen supply to the organs. 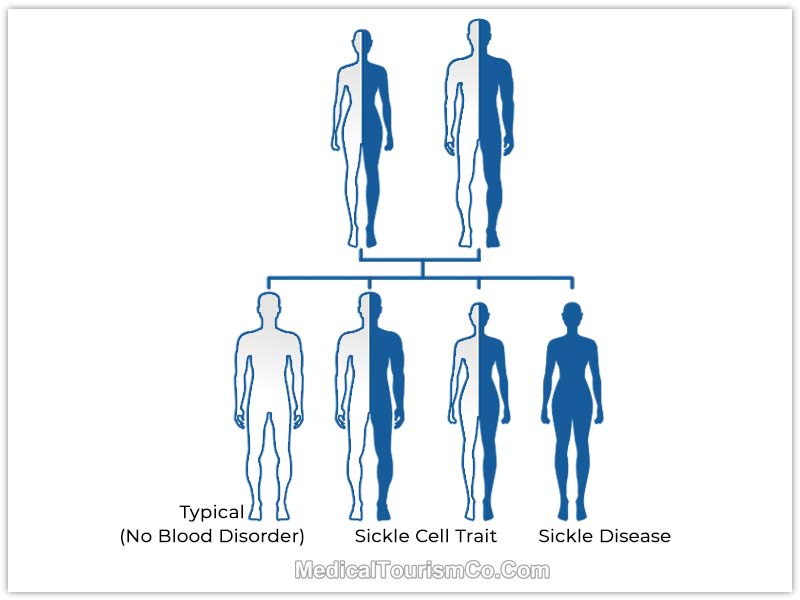 With this inheritance pattern, there are 4 possibilities:

The Procedure for Stem Cell Therapy in Sickle Cell Disease

The patient gets a free consultation with the concerned doctor. The doctor will perform an examination. Your past medical records, as well as the latest tests, will be evaluated. Every bit of information about your medical condition should be conveyed to the doctor.

The team of doctors will come to a provisional treatment plan. Along with the treatment plan, the costing is also discussed with the patient. If you have any doubts about the procedure, time period or price, you can ask our experts right away.

After reaching Mexico, you will be admitted to the hospital. Here, your pre-op examination and testing are done. Monitoring the vital signs before the transplantation is imperative.

Our Network Clinics in Mexico

Here is a list of the various facilities we provide to our patients:

Sickle Cell Anemia is Genetic in nature. It is passed on from both parents to their children. [link to inheritance H2]. If the parents have the gene for the disease, the child will either be a carrier or have the disease. In either case, the gene can’t skip a generation.

Sickle Cell Crisis is a situation where the sickled RBCs block the flow of blood in arteries and veins. Due to this, there is extreme pain in these areas of the body. for example, there might be a sudden sharp pain in your back, joints, arms or legs. This is why the Sickle Cell Crisis is also often called a Pain Episode.

The location and duration of pain vary from person to person. It pain can last hours to days even.

Pain episodes can be managed with or without taking medication, depending upon the severity.

In case of mild to moderate pain, Non-steroidal Anti-inflammatory Drugs (NSAIDs) such as ibuprofen or acetaminophen.

When the pain is more severe, opioids are the drugs of choice. Morphine or Codeine will be administered either via the oral route or by intravenous infusion.

Non-pharmacological pain management is based on the concept of increasing the total fluid volume in the body. This prevents the sickled blood cells from blocking any arteries.

If a child inherits one defective gene and one healthy gene from both the parents, it is said to be carrier state. This means that the child has the Sickle Cell Trait.

On the other hand, if a child gets both defective genes, the condition will manifest in its full-blown form. This is called Sickle Cell Disease.

Sickle Cell Trait will usually not show any symptoms. Sickle Cell Disease, on the contrary, is a very serious condition.

A simple blood test is used to detect abnormal hemoglobin (HbS). This will tell the doctor whether or not you have the gene for sickle cell anemia.

If the test comes out negative, there is no sickle cell gene present.

If the test is positive, further testing might be done to find out if one or both of the genes are affected.

Even in unborn babies, this test can be performed by taking a sample of the fluid surrounding the baby. This is called Amniotic fluid. Evidence of HbS will give a positive result.

Parents of an unborn, affected child are usually advised to see a genetic counselor.

SAVE MORE WITH MTC THIS NEW YEAR 2022