Stem Cells for Lymphoma in Mexico

Stem Cell (SCT) therapy in Guadalajara, Mexico is considered as a reliable option for the treatment of many diseases. For Lymphoma treatment with Stem Cells, Mexico provides a cost-effective treatment option.

Moreover, this medical practice is not yet legalized in the United States, therefore, Mexico being a neighboring country, it offers stem cells therapy as a better treatment option for such patients.

It is for this reason that many international patients opt for Stem Cell Treatment for Lymphoma in Mexico. 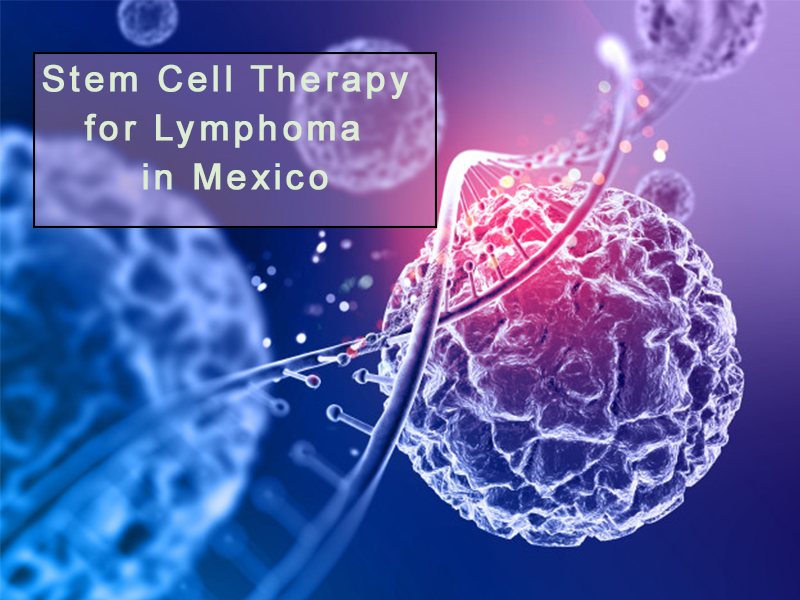 Stem cells are of two types depending on their origin, they are

ASCT is the most preferred way of using stem cells for cancer treatment.

The origin of allogeneic cells is different as these cells are extracted from someone else’s blood.

The donor is usually a relative, but the cells can also be taken from an unrelated donor. It is possible when the donor stem cells match with the recipient’s cells. In this way, any possibility of transplant rejection is avoided.

The allogeneic stem cells are given only when the patient has not responded to autologous stem cell transplant.

As earlier stated, both autologous and allogeneic stem cells have a different source. Nowadays, the doctors performing Stem Cell Treatment for Lymphoma in Los Algodones prefer the stem cells from the blood. They are known as peripheral blood stem cells.

These are stem cells that are collected from the bloodstream rather than directly from the bone marrow.

One Week before the Extraction

The procedure is simple, but it can take up to one to three days for sufficient extraction of the stem cells.

An average human body has little stem cells circulating throughout the bloodstream.

Therefore, granulocyte colony-stimulating factor (GCSF) shot is usually given to the patient. This can be given 5 to 6 days before the procedure. GCSF stimulates the entry of more stem cells in the bloodstream from the bone marrow.

One day before the extraction

The study nurse examines the patient’s veins. In case the veins are not healthy, then the nurse will insert a tunneled catheter in the collar bone of the patient.

The catheter will stay with the patient for another couple of weeks or months. This will let the nurse withdraw the blood sample or provide fluids and medications to the patients during the treatment.

The harvesting process lowers blood calcium levels. Thus, the patients should take a calcium-rich diet one day before and on the day of the harvest.

On the Day of the Extraction

As the patient is ready for Stem Cell Treatment for Lymphoma in Mexico, they are given a comfortable seating during the treatment.

If the patient is using the catheter, then the whole process will be done using the device.

However, if the nurse feels that the patient’s veins are okay, then IV Lines are used.

For this, the patient’s arms are connected with the extracting machine using the IV lines.

As calcium levels drop, the patients may feel a tingling sensation around the lips and fingertips. In such cases, the doctors/nurses provide calcium, which instantly supplies calcium to the bloodstream. Example of calcium injection used is Tums®.

If the extraction is done using the catheter, then the nurse will flush and recap it for future use.

On the contrary, if the intravenous lines are used, then the nurse will remove these lines and apply a bandage to prevent any bleeding. The patient should keep the dressing for at least 3 hours; however, they should remove it before 5 hours.

When to Call the Doctor?

Our body has a well-defined lymphatic system that is a germ-fighting network of the body. It comprises of lymph nodes, thymus gland, bone marrow, and the spleen.

Lymphoma is a cancer type that affects the growth of white blood cells. It has a direct effect on the lymphatic system of the body.

A Non-Hodgkin Lymphoma is a cancer type that affects the lymph nodes in the body. It has different cells involved as compared to the Hodgkin’s Lymphoma, and the treatment type is also different. 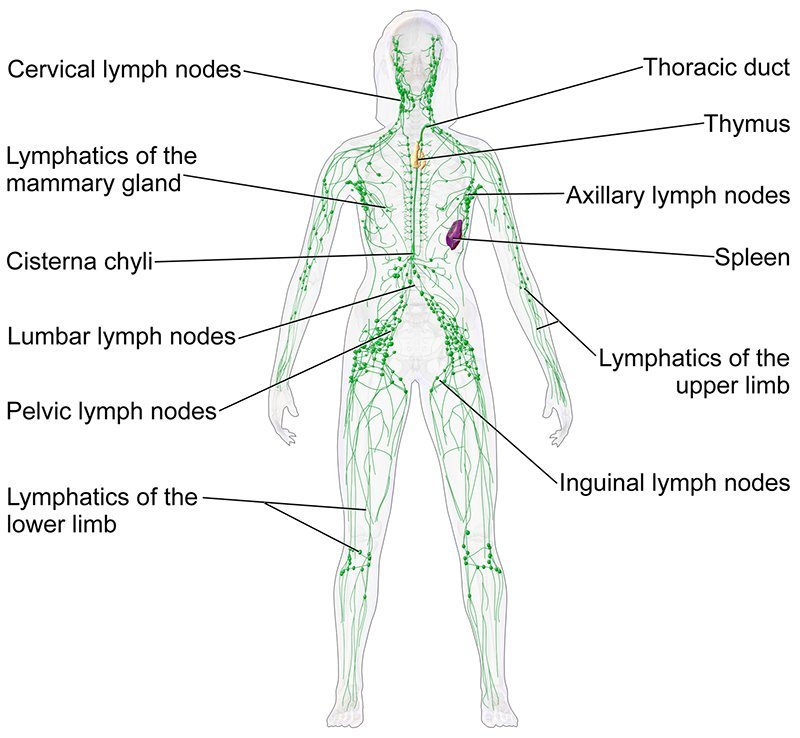 Lymphoma can begin in any part of the body wherever the nodes are present. The sites that are majorly affected are:

Different cells are responsible for different subtypes of NHL. NHL can be divided based on many factors like the type of cell that is affected, the extent of maturity, etc. Stem Cell Therapy for Lymphoma in Mexico is a suitable treatment for any sub-type of NHL.

There are mainly two types of cells that take part in the Non-Hodgkin Lymphoma. Based on the two, the NHL is divided into the following models:

The speed with which the cancerous cells grow and spread is another factor that helps in the classification of NHL.

Indolent Lymphoma: It grows and spreads slowly and is usually observed strictly for any growth. Follicular Lymphoma is the most common form of Indolent NHL in the United States of America.

Aggressive Lymphoma: As the name suggests, the cells grow and spread aggressively. People in the United States are usually affected with Diffuse large B cell lymphoma, which is a sub-type of Aggressive form of NHL.

Hodgkin’s Lymphoma (HL) occurs when the lymphatic cells undergo mutation. These cells are called lymphocyte, and they multiply at a fast rate during lymphoma.

As a result, the nodes become crowded with the cancerous and normal lymphocytes both. One can see the nodes bulging due to this sudden increase in cells.

A Hodgkin’s Lymphoma has many sub-types, and the diagnosis depends on the type of cells involved.

Classical Hodgkin’s Lymphoma (cHL) is the most common cancer form, which involves an increase in Reed-Sternberg cells. These are large and abnormally shaped B-cells present in the lymph nodes.

The following subtypes are included in Classical Hodgkin’s Lymphoma:

It is a rare subtype of Hodgkin’s Lymphoma. This abnormality also involves irregular and large cells that have a popcorn-like appearance. The disease is curable if an earlier diagnosis is made.

Hodgkin Lymphoma can be treated with the help of chemotherapy and radiation. Immunotherapy and Stem Cell Transplant (SCT) therapy are used when the standard options do not work.

Chemotherapy kills the cancerous cells, but it also affects the bone marrow. Hence, a higher chemotherapy dose cannot be given to the patients.

However, with Stem cell therapy, the physicians can administer stronger chemotherapy dosage.

It is because the stem cells help in blood formation that is exhausted during the chemotherapy process. Due to this, a lot of people prefer Stem Cell Therapy for Lymphoma in Mexico.

Along with this benefit, chemo-resistant patients, they can also benefit from stem cell transplantation. 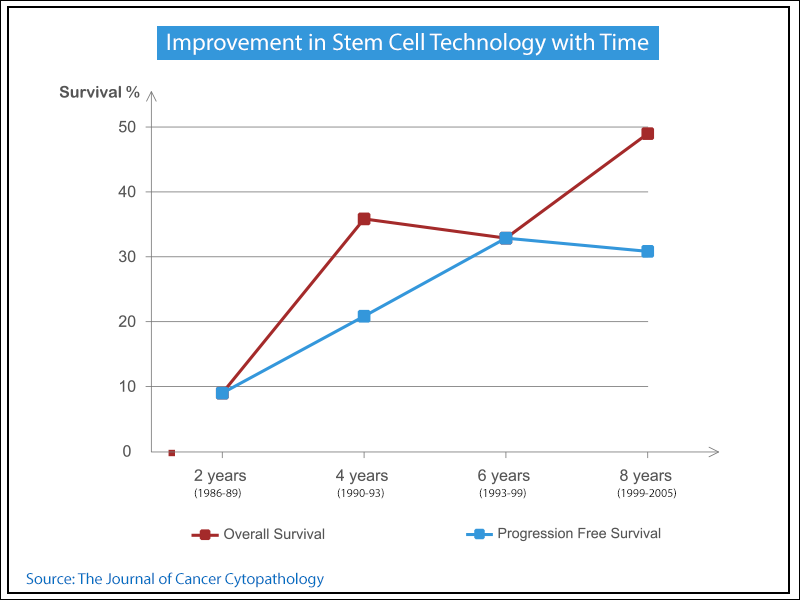 The data shows the Overall Survival and Progression-free survival rate of lymphoma patients, who have received Stem Cells therapy from 1986 till 2005. As the survival percentage along with time has increased, therefore, it seems that from 1986 to 2005, the stem cell therapy patient outcomes have improved.

The absolute risk of relapse, in general, decreased over time, though demonstrating statistically significant differences were likely limited by the small number of events in a study on 64 patients who did not respond to chemotherapy was given stem cell therapy. 31% of these patients showed overall survival, while 17% showed a progression-free survival after five years.

Therefore, this study confirms that at least one out of six patients respond to stem cell therapy even if they are chemo-resistant.

Why is Mexico Ideal for Lymphoma Treatment with Stem Cells?

Medical treatment in the USA is a costly affair. Therefore, people are inclined towards finding budget-friendly treatment options. As Mexico is neighbor-country, it is considered ideal for Stem Cell Therapy for Lymphoma patients from the USA.

Moreover, the number of private hospitals in Mexico has also risen in the past two decades. These facilities have standards that match their counterparts in the USA. So, the patients get the same quality of treatment at a much lower price.

Lymphoma Treatment with Stem Cell Therapy in Los Algodones and Guadalajara are becoming popular for the same reason.

Meanwhile, the family and the patient enjoy Mexican tourism; they also get a low cost and a high-quality treatment for their ailment through Medical tourism in Mexico.