Chronic knee pain is hard to bear. Unfortunately, treatment can be pricey if you lack health insurance. In this bind, getting a knee replacement in Spain can help.

This article will tell you all you need to know about taking that medical trip to Spain. Discover if it is for you and how you need to plan.

Why Choose Spain for Your Knee Replacement Surgery?

You may be wondering: Why Spain? There are several reasons.

For one thing, healthcare in Spain is relatively affordable.[1]HousingAnywhere
Healthcare and Health Insurance in Spain for Expats
“Spain is known for its inexpensive and high-quality healthcare.”
View in Article Going to Spain for your knee replacement can save a fair amount of money despite travel expenses. We’ll show you how much you can expect to save in the following section.

Are you worried that lower prices might indicate an inferior care? Don’t be.

Spain has one of the finest healthcare systems in the world. The World Health Organization ranks it seventh in overall efficiency, ahead of the United Kingdom, Canada, and the United States.[2]WHO
Measuring Overall Health System Performance for 191 Countries
“Overall efficiency in all WHO member states Spain- Rank 7.”
View in Article

When it comes to orthopedic surgery, Spain has numerous world-class clinics and hospitals. Their surgeons apply innovative technology to deliver exceptional care. We’ll take a look at specific hospitals and doctors later on.

Last but not least, Spain is a prime travel destination. Tourists from all corners of the globe visit Spain to explore its celebrated culture, unique cuisine, and historic cities. Not to mention its breathtaking Mediterranean coastline. 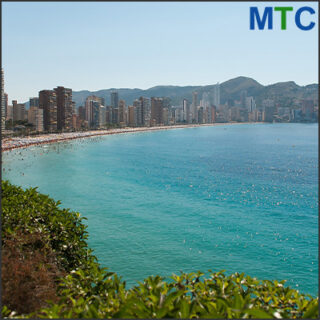 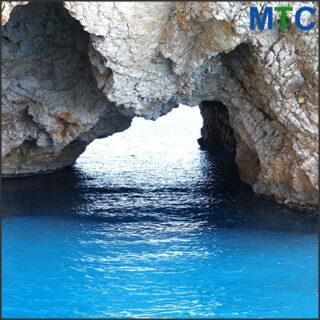 Due to these factors, Spain has a robust medical tourism industry. It generated more than $695 million of revenue in 2018 and is expected to grow exponentially over the next few years.[4]Fitur News
Health tourism will reach 200,000 visitors in 2020, says the president of SpainCares, in FITUR.
“Health tourism is a segment that has been growing considerably in recent years and which, in the specific case of Spain and according to our 2018 estimates, already generates revenues in excess of €600 million.”
View in Article

The cost of healthcare varies widely from country to country. Relative to other Western nations, a total knee replacement in Spain is reasonable. See the table below for price comparisons.

*Prices are subject to change. Fill our online quote form for the latest prices and specials.

Knee replacement is costly in the United States. According to the AARP, American hospitals charge an average of $50,000 for a total knee replacement.[5]AARP
When to Have Knee-Replacement Surgery — And What to Expect
“Hospitals charge almost $50,000 on average, though Medicare and private insurance generally cover most of that.”
View in Article Meanwhile, Blue Cross Blue Shield reports that knee surgery can cost up to $70,000 in New York.[6]Blue Cross Blue Shield Association
Blue Cross Blue Shield Association Study Reveals Extreme Cost Variations for Knee and Hip Replacement Surgeries
“However, it could cost as little as $11,317 in Montgomery, Alabama, and as much as $69,654 in New York, New York.”
View in Article

On average, US patients can expect to save around 70% by having their knee replacement done in Spain. Depending on the clinic, the savings could reach 80%.

Assuming you’re self-paying for your knee surgery, the money you’ll save by going to Spain for the operation exceeds the associated travel costs. Prices are typically all-inclusive, meaning they cover your:

You can find top-notch orthopedic clinics throughout Spain. Many of them belong to the Quironsalud healthcare network, which comprises:

Quironsalud is the largest hospital group in Spain. Its ultramodern facilities are equipped with cutting-edge technology and surgical equipment.

Patients here receive high-level, personalized care from experienced doctors and medical staff. Many Quironsalud hospitals cater to international patients. Below are three of them.

Teknon Medical Center is one of Spain’s most esteemed private hospitals. Located in Barcelona, it offers first-rate patient care in a quiet, elegant setting that appeals to international travelers.

Teknon is accredited by Joint Commission International and is home to over 400 specialist doctors. It is about a 15-minute drive from Barcelona Airport (BCN).

Teknon has an international program for medical tourists. Services include: 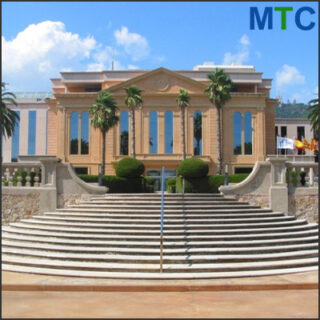 Hospital Universitari Sagrat Cor is another state-of-the-art facility in Barcelona. Its team of 1,100 professionals performs about 25,000 surgical operations each year.

It also serves as a distinguished teaching hospital, with accreditation from the University of Barcelona and the Spanish Ministry of Health. 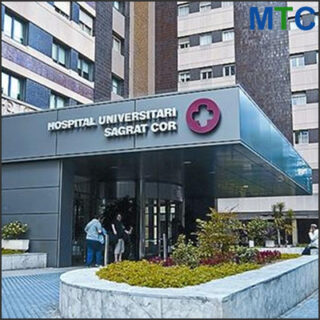 Ruber International Hospital is one of the largest hospitals in Spain’s capital city of Madrid. It has certifications from the International Organization for Standardization (ISO) for overall quality, environmental performance, and energy management. 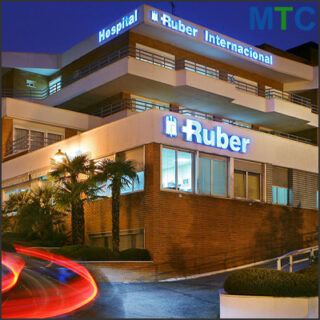 The knee surgeons listed in this section are among the best in their field.

Dr. Aamer Malik is an expert in knee and hip reconstructive surgery. He is internationally trained with over 15 years of professional experience.

In addition to his work as an orthopedic surgeon, he teaches medicine at Sagrat Cor University Hospital. He speaks Spanish, English, Urdu, Punjabi, and Swahili.

Dr. Malik has memberships in the following organizations: 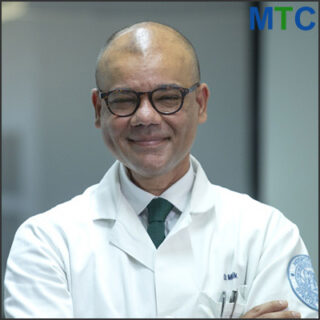 Dr. Ramon Cugat is co-director of Orthopaedic Surgery and Trauma Medicine at Quironsalud Barcelona Hospital. A specialist in knee surgery, he worked as a trauma medicine doctor at the 1992 Olympic Games in Barcelona.

Below are Dr. Cugat’s credentials:

Dr. Pedro Luis Ripoll is a highly regarded specialist in orthopedic surgery & trauma medicine. He is the head doctor of Trauma Medicine at Ruber International Hospital.

Dr. Ripoll has also been Director of Orthopedic Surgery & Trauma Medicine at Quirónsalud Murcia Hospital since 1982. Other credentials include: 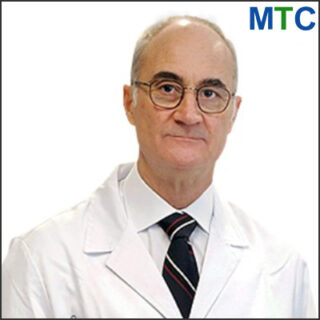 Planning Your Knee Replacement in Spain

Most knee replacements are inpatient procedures. You will likely have to spend several nights in the hospital, as well as a few nights in a hotel. All things considered, you should plan to be in Spain for at least one week.

Below is a typical itinerary; however, keep in mind that timelines vary according to individual circumstances. 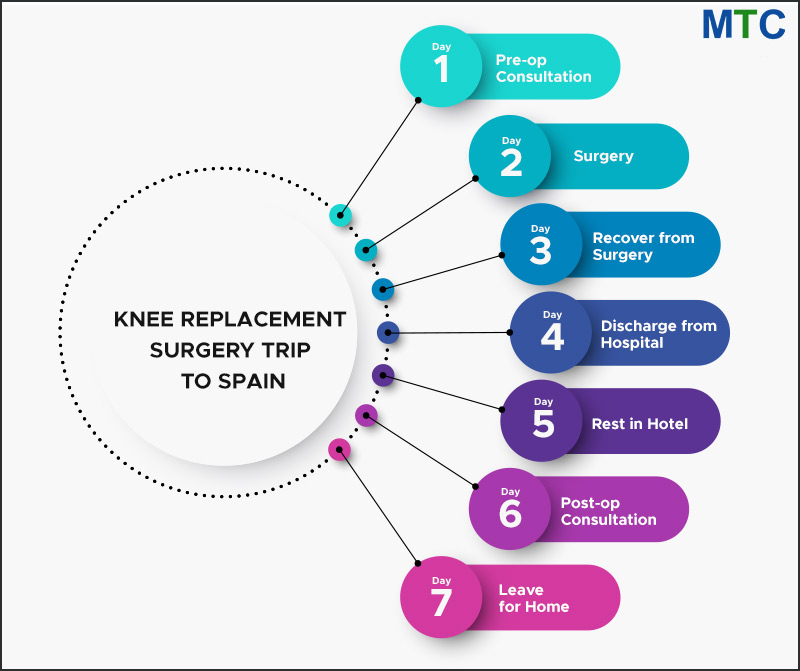 Hospital staff will help you plan your trip and book suitable accommodation. They will also arrange for your transport to and from the hospital. Be sure to share any questions or concerns with your doctor before your operation.

“Absolutely stunning hospital inside and out, with friendly and caring staff and excellent medical treatment.”

“One of the best hospitals in Spain, without a doubt. Wonderful treatment and patient care. Lovely and super professional staff.”

“Everything went well for me. I have already had several experiences in the hospital. In the emergency room, operating room, and consultations.

Kind and very professional treatment and excellent resolution of all my problems. Friends of mine have been operators there too. I recommend this hospital to all my friends and family.”

Spain attracts tourists — medical or otherwise — from all over the world. While you won’t be hiking up a mountain or swimming in the ocean after your knee surgery, you can still take in the picturesque landscapes and balmy Mediterranean weather.

In terms of medical tourism, the most popular destinations within Spain are Madrid and Barcelona. We’ve already covered their leading hospitals, so let’s take a quick look at what else these cities have to offer. 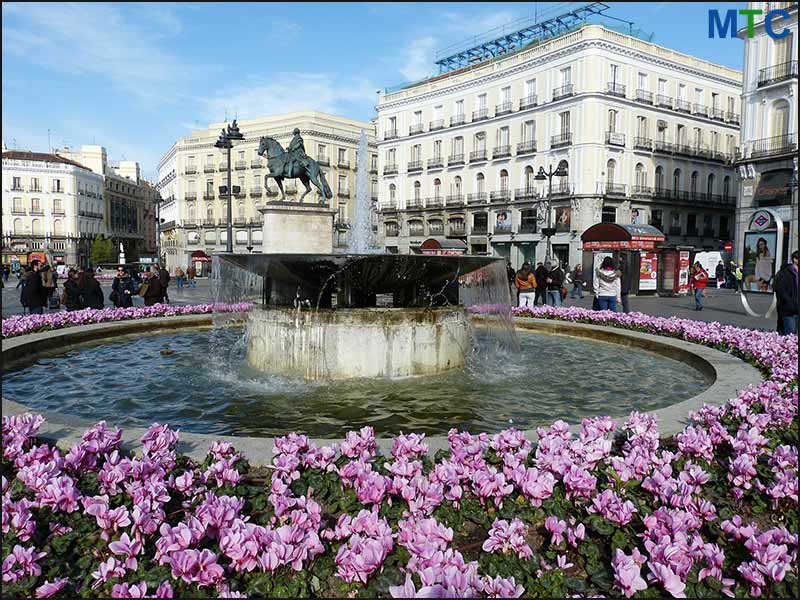 Madrid is an art lover’s paradise, containing some of the most admired museums in all of Europe. Other points of interest include its architecture, sports, food, and nightlife, to name a few. The airport is Madrid-Barajas Airport (MAD).

This coastal city serves as the capital of Catalonia, an autonomous region in northeastern Spain.

Barcelona boasts a stunning array of architecture, much of it dating back to medieval times. Its golden beaches provide a magnificent view of the Mediterranean Sea. 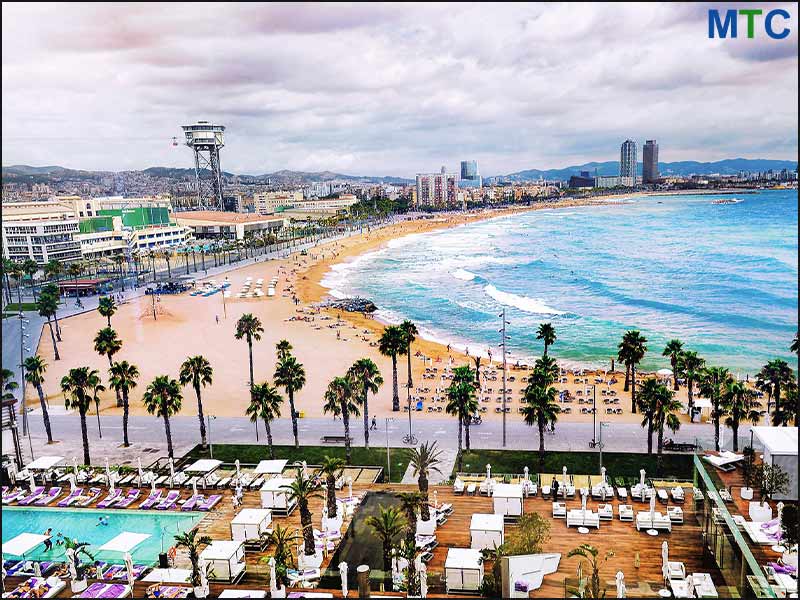 FAQs About Knee Replacement in Spain

Q: How much does a knee replacement cost in Spain?

Americans who lack insurance can save over 70% by going to Spain for their knee replacement.

Q: How long should I plan to stay in Spain for my TKR?

A: Generally speaking, you should plan to stay in Spain for one week.

Knee replacement surgery is usually an inpatient procedure. Most people spend 2-3 nights in the hospital following the operation. You will also spend a few nights in a hotel.

Q: What is the best knee replacement hospital in Spain?

A: The Quironsalud healthcare network comprises dozens of first-rate hospitals throughout Spain. The best hospitals for knee replacement surgery are located in major cities.

Medical tourism to Spain is growing in popularity thanks to the excellence and affordability of Spanish healthcare. It presents an attractive option for those who suffer from chronic knee pain but can’t afford the price of surgery in their home country. You can contact us to get a free quote.

1. HousingAnywhere: Healthcare & Health Insurance in Spain for Expats
2. WHO: Measuring Overall Health System Performance for 191 Countries
3. The Guardian: Spain to beat Japan in world life expectancy league table for 2040
4. Fitur News: Health tourism will reach 200,000 visitors in 2020
5. AARP: When to Have Knee-Replacement Surgery — And What to Expect
6. BCBS: Extreme Cost Variations for Knee and Hip Replacement Surgeries
7. Business Insider: The 19 most visited cities around the world in 2019