Welcome to our comprehensive program for Stem Cell Diabetes Treatment in Mexico. Medical Tourism Corporation has joined hands with San Diego-headquartered GIOSTAR, a global leader in stem cell research and therapy, for treating both Type 1 and Type 2 diabetes. True to its vision of bringing in all the technology in the lab to the benefit of people suffering from various diseases, GIOSTAR has helped 4,000 people regain good health.

✔ ​ Founded by Dr. Anand Srivastava, a well-known authority in stem cell technology
✔ ​  ​Leaders in stem cell therapy
✔ ​​  Involved in hardcore research for more than 15 years
✔ ​  ​Always take care of human safety
✔ ​​  Working with many world governments, such as India, Mexico, Thailand, China, and Columbia
✔ ​​  Advisory council made up of members connected with UCI, Harvard, London Imperial College and other prestigious institutions

I can Now Lead a Normal Life

“Been diabetic for a decade. After three stem cell applications, my blood sugar levels have gone down to 5.9 mmol/L which is considered normal (before therapy was 8.5 mmol/L). Stem cell therapy has definitely helped me lead a normal life. It is worth trying.”

“Have had type 1 juvenile onset diabetes for more than 50 years. Stem cell therapy has given me high hopes of stabilization. After therapy I have significant increase in insulin sensitivity. Don’t need large injections of insulin now. Noticed a month after treatment that I had more energy.” 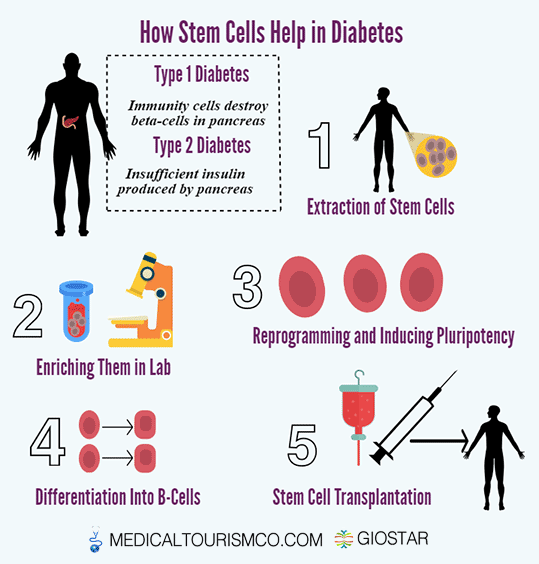 What Makes Our Stem Cell Program in Mexico for Diabetes Unique?

Personalized Treatment Approach
Unlike other clinics in Mexico which offer stem cells on an individual application basis, we offer comprehensive treatment plans comprising 3-4 applications. Each case is studied individually and we come up with a personalized protocol made up of several applications as a complete solution to the problem.

We Do Our Own Research
We have our own team of doctors for the investigative work in both Mexico and India, and we do not depend on other scientific studies. GIOSTAR has been a pioneer in stem cell research work since the year 2000.  In fact, the founder of the company has helped establish stem cell research programs at several world-class institutions, such as:

We Use Differentiated Human Stem Cells
A very important factor that sets us apart from other clinics in Mexico is that we use only “differentiated” stem cells. Other clinics usually infuse stem cells without differentiating them. We extract adipose tissue, and draw stem cells from them in the lab, which are further cultivated and multiplied. We use only induced pluripotent stem cells (iPSC) which means after extracting the stem cells we reverse their aging and render them blank so that these cells can differentiate into the desired cell type that would help improve the patient’s condition.

Affordable Therapy
Our packages are quite competitively priced. Contact us to know more.

Complete Trip Assistance
We do everything to make your stem cell therapy trip as hassle-free as possible. From arranging accommodation to transportation, we take care of each and every aspect of your medical trip.

Top Stem Cell Centers
We offer stem cell treatment at duly certified hospitals in Tijuana, Guadalajara, and Los Algodones. Del Pedro Medical Center in Tijuana is a state-of-the-art facility and the only hospital in TJ to have received the Certificate of Excellence issued by the Health Secretary in Mexico.

San Javier Hospital in Guadalajara is the first in Mexico to have received the Specialty Hospital certification. Our new stem cell spa in Los Algodones has a well-equipped Operation Room and trained staff.

GIOSTAR is a San Diego, California based research company committed to making the most advanced and elite science of stem cells available to the masses. Its advisory board council is made up of the most brilliant minds in stem cells research.

GIOSTAR is devoted to finding cures for diseases (which are till now considered incurable) with the help of stem cells – the master cells of our body from which the entire human body is created. Their main function is regenerating into cells that have been damaged by diseases or injury. The organization has helped over 4,000 people fight various conditions using stem cells.

Diabetes mellitus (DM), more commonly known as diabetes, is a metabolic disorder in which the body loses control over the levels of glucose present in the blood (blood sugar).This happens if the body stops making sufficient insulin or is not utilizing it the way it should (insulin controls metabolism by effecting absorption of excess glucose in the blood.)

As a result, excess sugar stays in the blood. Increased blood sugar levels over a period of time could trigger several health issues. In both the types of diabetes discussed below the common important factor is lack of functional beta cells (β-cells).

What are Beta Cells (β-cells)?

✔  ​These are a kind of cells found in pancreatic islets.

✔​  Their main function is storing and releasing insulin.

Numerous studies suggest regeneration of stem cells into beta-cells. Researchers at Harvard University and the Washington University School of Medicine in St. Louis have reported success in producing insulin-secreting cells from stem cells.1 Researchers Douglas A Melton et al2 have commented that “the generation of an unlimited supply of human beta cells could extend this therapy to millions of new patients...”

Type 1 diabetes occurs as a result of your immune system attacking the beta cells in the pancreas responsible for production of insulin. Because of this, the body stops making insulin. Type 1 diabetes typically affects children and young adults. People with it need to take insulin every single day to keep their bodies working. It is also known as juvenile diabetes.

The more common type of diabetes, it results in the body either not making insulin or not utilizing it properly. One may develop type 2 diabetes at any age, although it is more common in middle-aged and older people. 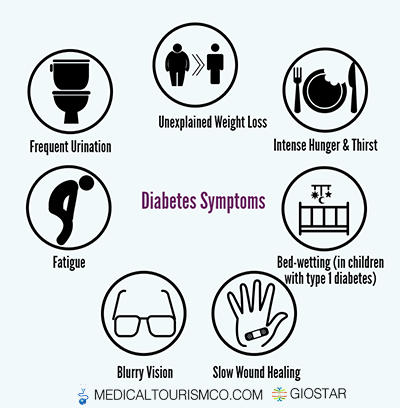 Lack of control over blood sugar levels can be quite damaging. Some of the complications associated with diabetes include:

✔​  Damage to Nerves: Resulting in tingling sensation, numbness in toes and fingers, and even erectile dysfunction

✔​  Damage to Kidneys: Irreversible kidney disease requiring dialysis or even a transplant

How Stem Cells Help in Diabetes?

✔​  We have the technology to isolate sufficient number of useful stem cells (autologous or allogenic) and re-administering it into the body.

✔​  This is done either through an IV or by directly infusing them into the targeted site.

✔​  On re-entering the body, the stem cells are known to colonize in the damaged parts of the pancreas.

✔​  The donor cells are known to release paracrine factors, and differentiate into beta cells, initiate the process of new blood vessel formation, and also trigger secretion of new immune cells for counteracting the autoimmune system.

Stem cell therapy can make diabetes more manageable for you.

SAVE MORE WITH MTC THIS NEW YEAR 2022