Have you been considering a full mouth restoration but been putting it off due to high dentist bills? Head to Costa Rica to get the same treatment at a fraction of the cost you would pay in the U.S. or Canada. 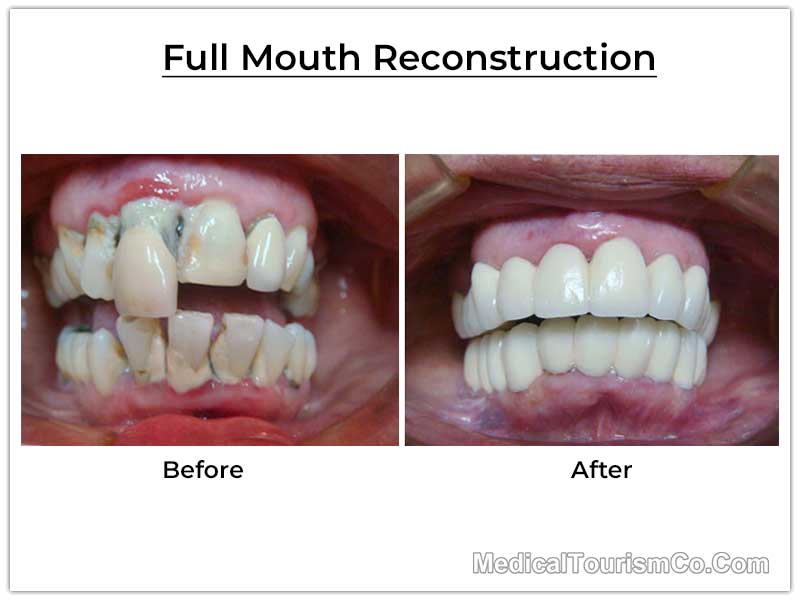 Currently, Costa Rica is one of the leading choices for dental tourists who are looking for affordable dental care without compromising on the quality of service.

Keep a few days aside to explore this beautiful country, and you will return home with a brand-new smile and savings of around 50-70%.

How Much Will a Full Mouth Restoration Cost in Costa Rica?

You have to pay US$10,900 for a full mouth reconstruction in Costa Rica. However, if you require bone grafting and a sinus lift, the cost of the dental procedure will be US$22,000.

By choosing Costa Rica as your dental tourism destination, you end up saving US$27,000 and upwards.

Let us look at a few of the reasons for this considerable price gap:

Due to this, they can afford to offer their services at lowered rates.

You would be charged for the same services in America or Canada.

Here are a few of the extra costs you may incur when getting full mouth restoration in the USA:

Our All-on-4 Packages include:

So, how do you go about finding the right dental clinic in Costa Rica? Here are a few key questions you should be asking, and we also give you six reasons to choose the New Smile Dental Group in San Jose for your dental treatments.

Our dental clinic was the first in Costa Rica to be internationally accredited by the American Association for Accreditation of Ambulatory Surgery Facilities, Inc. (AAAASF).

The dental group is a member of the American Dental Association (ADA) and the American Academy of Implant Dentistry (AAID).

Dr. Mario Bonilla D.D.S., the head clinician, has over 12 years of total experience with five years of expertise in placing dental implants. He has done an Implantology Course at OCO Biomedical in Albuquerque, New Mexico in 2009.

He has also done a VALPLAST course in New York.

Allan Vargas González D.D.S. is our maxillofacial specialist. He did his postdoctoral degree in Oral and Maxillofacial Surgery Program at Universidad Nacional Autónoma de México in 2003-2007

Our clinic has an on-site dental lab which gives it complete control over the design, fabrication, and quick delivery of dental restorations. 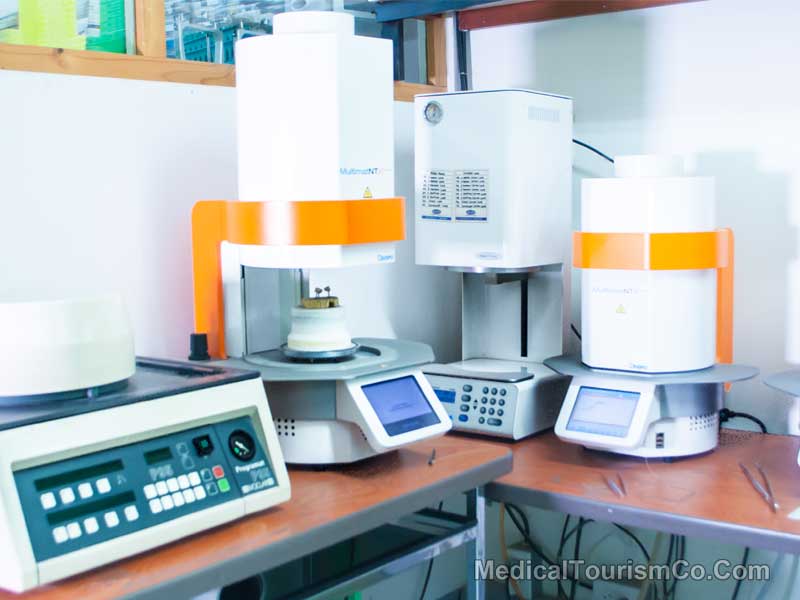 At our modern clinic and laboratory, we have the finest equipment and tools available, as well as state-of-the-art technology such as CAD/CAM, providing our patients with world-class service.

We have numerous patients who recommend dental work in Costa Rica in their reviews.

Ellis Berg from California, speaks about his experience of getting dental implants in Costa Rica. He also got dental bridges and dental crowns.

Since a full mouth reconstruction can include a variety of dental treatments, it can be a lengthy procedure. Typically, the treatment is done in stages and can require 2-3 visits to the dentist.

Although full mouth dental implants is a lengthy procedure, the result can be advantageous. With the improved appearance, speech, and chewing functions, you will feel a massive change in your quality of life.

What is a Full Mouth Restoration?

A full mouth rehabilitation, also known as a full mouth reconstruction, is recommended for patients with several broken, missing, damaged, and worn teeth.

It is the process of rebuilding/restoring all of the teeth in both the upper and lower jaws. 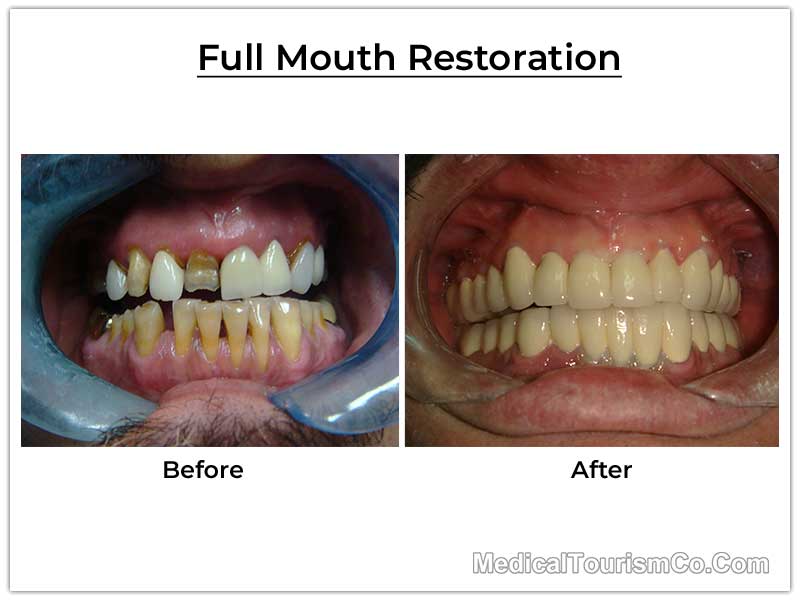 The aim of the treatment is generally any one or more of the following:

No two full mouth reconstruction procedures are the same. It is a highly customized treatment and the specific procedures and treatments needed vary from patient to patient.

A full mouth dental reconstruction can include a variety of dental procedures, including:

Dr. Charles A Babbush, DDS, MScD, is one of the top dental implantologists in the world. In his book Dental Implants: The Art and Science, Dr. Babbush writes, “Dental implants are among the most successful procedures in dentistry.”

Crowns restore your teeth’s shape and size, strength, and improve the appearance. 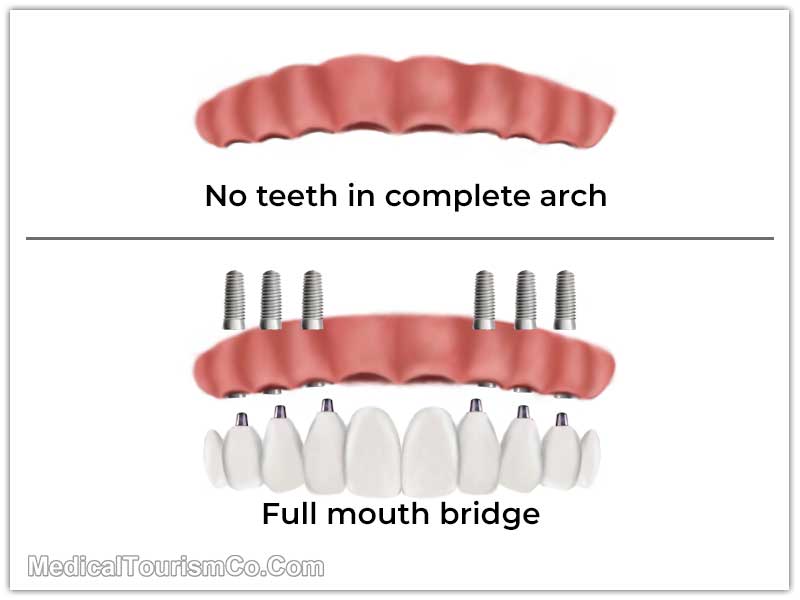 The end crowns are placed on your existing teeth, while the middle crowns will fill the gaps.

Teeth affect your speech, chewing, and facial appearance. These full-mouth restorations greatly enhance the quality of life of a person who has extensive tooth damage and gum disease.

With modern dental anesthetics and sedation, no dental procedure should hurt. Your dentist will recommend the appropriate level of medication for your comfort.

The results last depending on how closely you follow the doctor’s post-op instructions. If you brush and floss daily and see him every few months for check-ups, you should expect your results to last for a long time.

A CT scan is a must to figure out how much bone is left in your jaw and whether you are the right candidate for the implant surgery.

Yes. A young patient needs to be at least 18-20 years of age. This is because during a growth spurt, a child’s jawbone is enlarged.

There is no upper limit on the age at which implants can be given. Even 85-90-year-old patients have shown good prognosis with implants.

Good candidates are those who have clenching habits, grind their teeth, or who have worn down teeth.

Those who have severely damaged teeth or are suffering from jaw pain, headaches, have missing teeth, gum disease, or a bite that is off-balance, can greatly benefit with a full mouth reconstruction.

The primary difference is that a smile makeover is designed to rejuvenate the teeth and gums using cosmetic techniques, while full mouth reconstruction is intended to address the functional or health concerns.

A full mouth reconstruction can also include aesthetic treatments if needed.

Yes. The front teeth, the tongue, and the lips are all involved in the sounds we produce.

If a tooth has been damaged by disease or by grinding, it will no longer contact the tongue or the lips the way it should to produce a particular sound. Restoring these teeth would mean improved speech.

After every significant dental procedure, a rest of 3-7 days is recommended.

Do warm salt water rinses multiple times in a day. Consume only liquids or soft foods for the first day or two after your oral surgery. Do not smoke as it hinders the recovery process.

Your tickets should cost you less than $500 if book them 2 to 3 weeks in advance.

According to a report released by the World Health Organization (WHO), the Costa Rican healthcare system ranks one notch up than that of the USA.

Costa Rican dental clinics have accreditations from international organizations and cater to thousands of foreign patients.

Since Costa Rica is a preferred choice of thousands of dental tourists, the dentists here speak good English. Besides English, our head dental surgeon is fluent in Spanish and Portuguese.

We can schedule your dental procedure on a day convenient to you, sans any waiting period.

This beautiful Central American country is rich in biodiversity. Tourists can expect to see an abundance of wildlife. 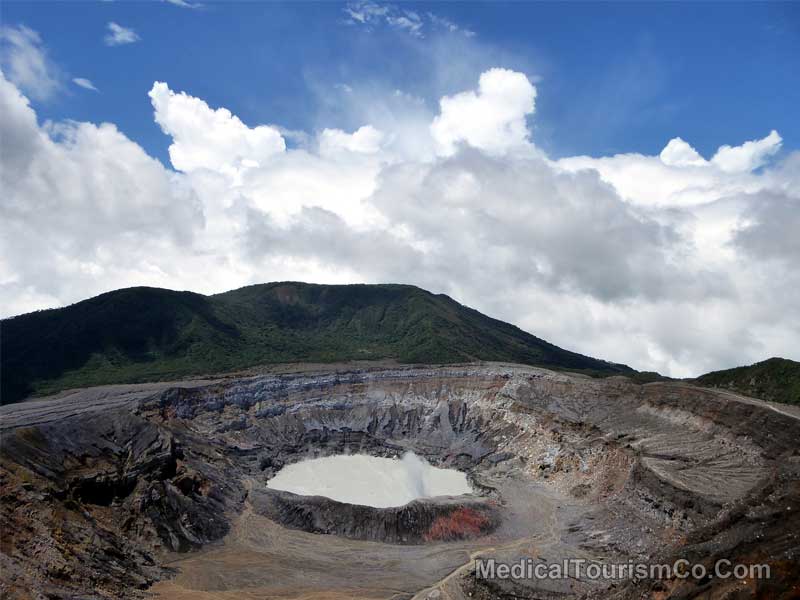 You have plenty of things to do as well. You can hike in its rainforests, lounge on its beaches, and enjoy in its hot springs.

San Jose: The city is your likely point of arrival. You’ll find yourself with lots to do here, including visiting museums, restaurants and national parks.

Must do: San Jose Museum Tours to the Gold Museum, Jade Museum, and The Children’s Museum.

Must do: Visit the Irazú Volcano National Park. The volcano is one of the most active volcanoes in Costa Rica.

Heredia: Most tourists enjoy the coffee plantations and the stunning waterfalls. 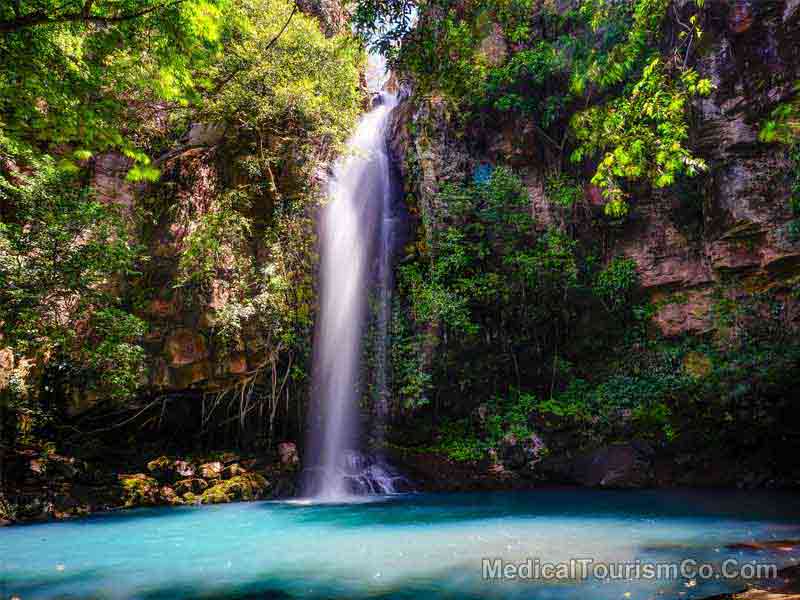 Must do: Visit the breathtaking La Paz Waterfall Gardens. It is only a half day trip.

Alajuela: The Poás volcano is another leisurely day trip. You can see one of the largest craters in the world. You can then visit the nearby town of Poasito, for fresh strawberries and cheese tortillas.

Puntarenas: If you are traveling between August and October, you could consider going on a whale watching excursion.

Must do: Don’t miss the opportunity to surf in Playa Hermosa. The beach is clean and the waves here are world­-renowned.

Limon: It is paradise on the Caribbean coast, complete with white sand beaches. It features everything from wetlands to mountains.

Costa Rica is ranked Number 1 in the Happy Planet Index

How to Get to Costa Rica?

The dental clinic is in San Jose, the country’s capital. You can take a flight to Juan Santamaría International Airport (IATA Code: SJO) in the city of Alajuela, which is only 11 miles from our dental clinic.

Dry Season (Mid-December to April) is the best time to visit the country. Average temperature during this season in San Jose ranges between 73-78 degrees Fahrenheit.

It is the ideal time for exploring rainforests and beaches. So, room rates can become expensive. It is advisable to book in advance.

Rainy Season (May to November) is known as the “green season.”

The average temperature in San Jose during this season ranges from 75-78 degrees Fahrenheit.

Though the prices are lower, a drawback of coming in this season is that roads are badly affected by rains, making it difficult to head outside.

Visa is not required for the Americans and Canadians traveling here, provided their stay does not exceed 90 days.

According to the U.S Department of State, a current passport valid for the entire length of the trip is mandatory. A return ticket to exit the country is also required.

Spanish is the official language of Costa Rica. Keep a list of handy Spanish phrases on you.

Only use licensed taxis, which are identified by numbered yellow triangles painted on the side.

If you travel by local bus, keep your personal belongings with you, rather than in overhead storage compartments.

Costa Rica is a safe country, but there are cases of theft in several parts of the country, especially in tourist areas, so it is advisable to be alert at all times.

According to the U.S. Department of State, exercise increased caution in Liberia, Limon, Desamparados neighborhood in San Rafael and Pavas and hospital neighborhoods in San Jose.

The Costa Rican Tourism Board, along with the police, have created a subdivision of tourist police with more than 250 officers, whose primary purpose is to maintain order and security in tourist areas. If you have any questions or concerns, you can seek them.

Want to plan your dental vacation to Costa Rica for your new smile? Contact us for a free pricing quote. We will answer all your queries and guide you through the entire process.