The presence of gallstones in the common bile duct is referred to as choledocholithiasis. Invariably, the stone from the gallbladder passes into the biliary duct system causing obstruction of the bile duct. This in turn, may lead to damage of the cells of the liver and symptomatically manifest as jaundice. In the United States, the incidence of gallstones is about 20% in people belonging to the age group of 65 years and above. 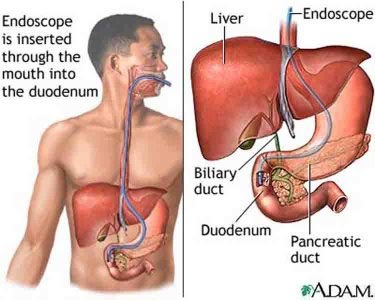 Clinically, 80% of gallstones don’t present with any symptoms or other problems, however, if the stone passes down into the common bile duct, it is potentially dangerous, (which is a possibility in 15% of the patients). Patients suffering from choledocholithiasis are at the risk of developing pancreatitis. The objective of the endoscopic surgery is to relive the blockage which is done using Endoscopic Retrograde Cholangiopancreatography (ERCP), which is a diagnostic test along with a procedure called ERS (Endoscopic retrograde sphincterotomy), which involves a surgical cut into the muscle in the common bile duct, to remove the stone. Bile duct surgery abroad provides a huge opportunity to save costs whilst ensuring same quality of surgical care and medical outcomes.

Endoscopic removal of bile stones in the Bile Duct

Preparation for the endoscopic removal of stone in the bile duct

Management of gall stone in bile duct abroad saves considerable amount of expenses of the patients whilst ensuring same quality of medical care and medical outcome in comparison to the United States.

India has emerged as a centre for medical tourism thanks to its low cost gall stone surgery which allows cost savings of over 80% for American patients. Highly qualified medical teams and international standards of quality and medical protocols have resulting in the growth of the medical tourism market in the country. There are several JCI accredited hospitals in the country which provide quality medical care at low cost, compared to American Hospitals.

Being close to the United States, health care in Mexico is rated as one of the best in the world. Mexican doctors are known for their international quality of medical care services in the United States. With additional advantages of cultural similarity and low cost of gall stone removal surgery abroad, Mexico is one of the most preferred medical tourism destinations.

Jordan has been labeled as one of the most rapidly growing medical tourism destinations across the world. This is attributed to its superior quality of medical care, specialized and trained team of medical professionals, internationally accredited hospitals and latest and advanced technological equipments. Management of bile duct abroad, has the biggest advantage of cost savings for American patients